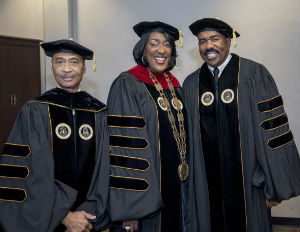 ASU’s president, Gwendolyn E. Boyd, D. Min., praised Steve Harvey’s “courageous and generous spirit.â€ She went on, “You epitomize courage, excellence, wisdom, and strength, and are to be commended and emulated. I am delighted and privileged to make you an official member of the Hornet Nation.â€

Steve Harvey’s message of hope, humility, and determination inspired all who heard him. He called on the graduates of this HBCU to exceed achieving mere personal success.

“Success is for yourself. Great people change other people’s lives.… Take this degree and go change some lives with it,â€ Harvey said.

To hear all of Harvey’s speech and see him receive the honorary doctorate, click below.