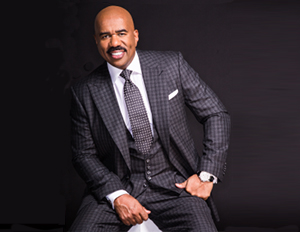 Harvey took home the Outstanding Game Show Host award for hosting Family FeudÂ along with the Outstanding Informative Talk Show Host Emmy for his syndicated talk show, Steve Harvey.Â The veteran comedian, however, was not present to receive the awards in person during the live taping, which took place at the Pasadena Civic Auditorium in California.

In addition to hosting those two Emmy-winning shows, Harvey also hosts a string of other programs. The star-studded version of his hit game show, Celebrity Family Feud, will debut on June 11 on ABC and feature stars such as Amy Schumer and George Lopez. Harvey’s own family members are also set to make an appearance on the show, reports TV Insider.

Ironically, his new reality competition, titled Steve Harvey’s Funderdome, will premiere on the same exact day and station. On the show, up-and-coming entrepreneurs will go head-to-head to competeÂ for funding for their business, which will be determined by a live studio audience.

Meanwhile, the Little Big Shots spinoff, Little Big Shots: Forever Young, will premiere on NBC on June 21. Rather than showcase talented children, Harvey will conduct his signature couch interviews with senior citizens with unique talents and big personalities. Just like the original series, Harvey has teamed up with Ellen DeGeneres to executive produce the series.

And, if you still can’t get enough of the original king of comedy, you can also catch him emceeing the upcoming season of Showtime at the Apollo. Harvey will host the legendary music and comic showcase, which has been picked up by Fox, in a weekly series.