Steve Jobs Anniversary: What I Learned From Him About Perseverance 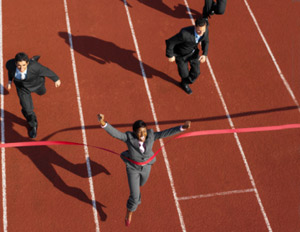 Anyone who reads this blog with any frequency knows that I am no tech-geek. To the contrary, I have dragged myself, with great reluctance and way too much whining, into the digital age. It took me months to actually use the cell phone I was given as a gift, to adopt email as a daily routine, become a Facebook fan, and tweet–not just think–my thoughts.

My orientation to technology is perhaps best illustrated by this: My laptop, iPod, and headphones are all hand-me-downs from my children! They have to have the newest/latest/greatest while their castoffs are just fine for me. So, I was surprised by how deeply the passing of Steve Jobs has impacted me. Honestly, I’m right there with the millions tweeting #iSad.

Jobs’ passing is devastating because he was so young, brilliant, creative, and innovative, presumably, he had so much more to give the world. But my sense of loss is more personal than that because, like so many, I came to feel that I sort of knew Jobs, the way we feel we know people who appear on television a lot as themselves. That familiar image of him in his unselfconsciously casual uniform of jeans, sneakers and black mockneck, standing in front of a giant screen, delivering the latest sales pitch for the latest Apple product, that would translate into the latest windfall for a company whose products we came to know and love is indelible–and more powerful now that he’s gone.

The second most commonly viewed image of Jobs is of him wearing a cap and gown, standing at a podium, the sun on his face, delivering one of the most candid and eloquent commencement addresses of our generation at Stanford University in 2005. He had recently recovered from his first surgery for pancreatic cancer and he believed himself cured. (The disease is what ultimately claimed his life.)

Famously private, Jobs offered several glimpses into the forces that shaped him into the extraordinary person he was that day. He talked about being given up by an unwed graduate student and how the couple slated to adopt him reneged because he was a boy and they wanted a girl. He spoke of dropping out of college because he had no idea where it was leading and he didn’t want to exhaust his hardworking parents’ life savings on an aimless pursuit. He shared how he pieced his life and career together by truly pursuing what he loved, rather than being moved along by the expectations of others. Jobs shared a lot of advice that beautiful day that is worth remembering and spreading around. So, here goes:

You have to trust in something–your gut, destiny, life, karma, whatever. This approach has never let me down, and it has made all the difference in my life.

Getting fired from Apple was the best thing that could have ever happened to me. The heaviness of being successful was replaced by the lightness of being a beginner again, less sure about everything. It freed me to enter one of the most creative periods of my life.

Sometimes life hits you with a brick. Don’t lose faith.

The only way to do great work is to love what you do. If you haven’t found it yet, keep looking. Don’t settle. As with all matters of the heart, you’ll know when you find it. And, like any great relationship, it just gets better and better as the years roll on.

I have looked in the mirror every morning and asked myself: “If today were the last day of my life, would I want to do what I am about to do today?â€ And whenever the answer has been “Noâ€ for too many days in a row, I know I need to change something.

Remembering that you are going to die is the best way I know to avoid the trap of thinking you have something to lose.

Your time is limited, so don’t waste it living someone else’s life.

Don’t be trapped by dogma–which is living with the results of other people’s thinking. Don’t let the noise of others’ opinions drown out your own inner voice.

Most important, have the courage to follow your heart and intuition. They somehow already know what you truly want to become. Everything else is secondary.

These little tidbits are not the most original. They resonate with a familiarity found in time-tested wisdom from many sources. But Jobs delivered them from the heart, perhaps more like apple pie than chicken soup for the soul. He changed the world and the way we each function on a daily basis. For that, as one young man wrote on a sign posted outside the Apple store in mid-Manhattan, we can only say, “iThankYou.â€