Still The Greatest! Muhammad Ali's Selfie Knocks Us Out 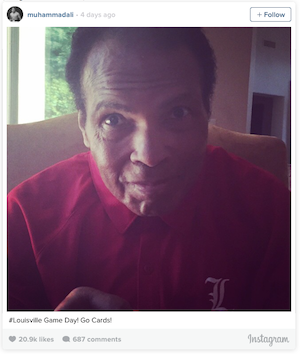 Still pretty, still floating like a bee, Muhammad Ali captivated the digital world when he posted a selfie on his Instagram on Saturday.

The 72-year-old former heavyweight champion took the photo to support his Louisville Cardinals against Kentucky in college football. “#Louisville Game Day! Go Cards!” Ali’s caption read as his more than 124,000 followers liked the post a whopping 20,000-times and counting. The 9-3 Cardinals would go on to beat the Wildcats in a shoot-out, 44-40.

With a mug like that cheering you on, there’s no surprise that the team could come home with the win. See his mischievous expression in full by clicking here.

The three-time heavyweight champion and Louisville native opened his @MuhammadAli account in November. This appears to refute claims made by his brother, Rahman Ali, who said that Muhammad, who suffers from Parkinson’s, was in dire health earlier this year.

Just how heavy was Ali’s selfie?! We took to the interwebs to see what you thought! Scroll through the pages below!