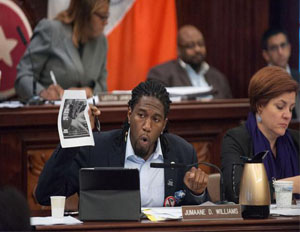 The controversial ‘Stop and Frisk‘ policy was being reviewed at a City Council hearing this past Wednesday leading to heated arguments amongst some council members.

The policy, which lends itself to the profiling of minorities, has led to a divide within the City Council.

Councilman Peter Vallone Jr. who is in charge of the Public Safety Committee held the hearing. Vallone and Councilman Robert Jackson argued after Jackson played a tape of an NYPD officer calling a Harlem teenager a “mutt.”