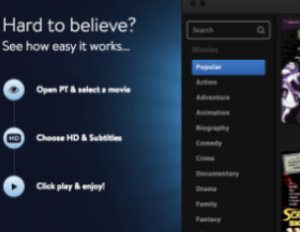 Popcorn Time doesn't host pirated films, but it makes searching for them a more pleasurable experience (until you get caught).

It turns out piracy is incredibly convenient, given the right packaging.

And Netflix is worried that making it as easy as its streaming service will cut into its bottom line, according to a letter sent to shareholders.

In a letter to shareholders, Netflix CEO Reed Hastings described the company’s growth over the past year, gaining 13 million new subscribers and reaching a record 57.4 million members. “We expect to end Q1 2015 with 61.4 million global members,” said Hastings. “Internet TV is growing globally and Netflix is leading the charge.”

He also mentioned the emergence of streaming competition, and that it isn’t to be taken lightly. Popcorn Time, one of the services mentioned, is much like Netflix. There’s one huge difference, though: it’s free, and streaming stolen media.

There is no news yet on timing or price of HBO’s expansion of a direct-to-consumer model to the US. Their Nordics’ offer is priced about the same as Netflix but the content offering includes only HBO and other original series, and not the breadth of movie content HBO offers in the US.

Verizon and Redbox shut down their Netflix streaming competitor after about one year of operation. CBS launched its CBS All Access streaming service which, like Hulu, has commercial interruptions. Amazon Prime, Hulu, and Yahoo are all increasing their original programming efforts.

Shomi and CraveTV launched in Canada. In many of our international markets, we face competition from both stand alone OTT services (Clarovideo in Mexico, for instance) and ones associated with incumbent broadcasters (CanalPlay in France). In Australia we will face strong competition this year, and look forward to getting started later this quarter.

Piracy continues to be one of our biggest competitors. This graph of Popcorn Time’s sharp rise relative to Netflix and HBO in the Netherlands, for example, is sobering.

There are alternatives to streaming pirated movies and TV shows, and Netflix isn’t the only one.

HBO GO is the company’s streaming service exclusively for subscribers to its cable option. But soon, that won’t be the case. This year, HBO is offering a streaming-only HBO GO service, so you won’t need a cable box to watch Game of Thrones, The Wire, or a wealth of other classic shows and movies.

Broadcast companies know the world is moving toward a streaming-only model. While some companies are fighting against the new movement, DISH Network is fully embracing it with Sling, its streaming service that brings live television to your mobile device for $20. From HGTV to ESPN, you can watch your favorite cable shows wherever you want. Sling will even offer packages of channels (for an additional cost) so you can get whatever channel you want.

You could try Popcorn Time here, but be warned: you’re pirating movies.