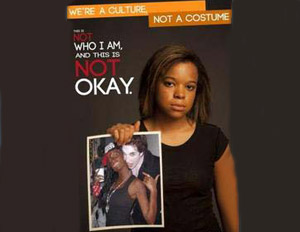 Halloween is meant to be fun, but on a college campus things can often go too far. It’s this exact reason that an Ohio University student organization is taking a stand against racist Halloween costumes.

Students Teaching Against Racism (STARS) launched a poster campaign to ignite a conversation about offensive costumes–specifically those depicting various racial and ethnic groups. Each poster, which features an OU student holding up a picture of a racial caricature, reads “We’re a culture, not a costume;â€ followed by: “This is not who I am, and this is not okay.â€

The student-crafted posters went viral, garnering over 50,000 visits to Sarah Williams‘ Tumblr account. The group’s president is shocked at the overwhelming amount of attention the posters are receiving, but glad they’ve been able to spark discourse around the topic.

Click here to read more about STARS at BlackEnterprise.com/BENext