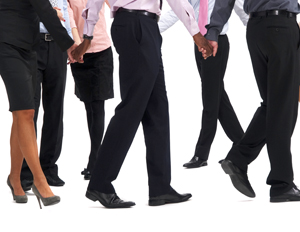 A recent German surveys found men no longer prefer the beautiful—yet unemployed—trophy on their arms. They love power women who make their own coin and are independent in their careers.

In 2007, the Social Science Research Centre Berlin (WZB) asked 2,000 men and women in their life plans, and last year, the center revisited the subject with 211 of those men and women. The most recent findings reflected that more than two thirds of men expected their partner to be financially independent. In 2007, only half found that factor to be vital.

Seventy-six percent of men said having a partner without a job was out of the question, while 45 percent said they wanted a woman who earned a serious amount of money.

This echoes last year’s findings from the Hamilton Project, a Brookings Institution project that tracks earnings and life prospect trends, where marriage rates rose for top female earners, even as they declined for women in lower earning brackets.

Does this mean men are looking at more than a woman’s physical assets to focus on their intellectual and intangible capital? Considering that the average young, single woman with no children is surpassing her male peer in terms of earnings and employment, the choice to date a woman who is about her business and bringing home her own bacon may just be an indicator thatÂ  many men have no choice but to consider earnings potential and career goals in choosing their mate.