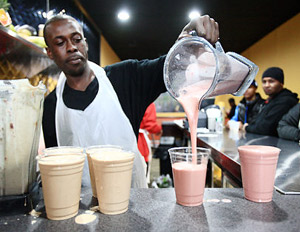 A view behind the counter at Juices for Life

Anyone familiar with Castle Hill Avenue in the Bronx, NY is used to seeing an assortment of bodegas, car accessory shops, hair salons and nail shops. It’s not the neighborhood most would expect a healthy living juice bar to be located, but according to David Styles, known to music fans as Styles P, that’s exactly why it’s needed.

A little over a year ago, Styles, along with his business partners, established Juices for Life, a local juice bar that serves up natural and healthy beverages. According to Styles, who serves as the face of the business, his job is to spread the word on the benefits of juicing to communities of color. He swears by his commitment to the lifestyle daily on Twitter, in every interview he does and in general conversation. These days he wants to take being health-conscious a step further, whether that’s offering health tips or franchising his business, Styles is interested in pursuing it all. “One way or another,â€ he says, “we all need a reminder to stay healthy or spread the word about getting to that healthy way of being to someone else.â€ BlackEnterprise.com caught up with the enterprising entertainer, who spoke on his budding business and healthy lifestyle.

What was the impetus behind starting Juices for Life?

My partner had a juice bar prior to this one and I used to be a frequent customer of it. When I first started going, it was like me and six other people total as customers. It was just such a life-changer for me that I felt like I had to spread the word, so it kind of became my hangout spot. So I would be like, “If you want to meet me, meet me at the juice bar.â€ And it just became something that I tried to put all of my friends on to. It became home base for me, a way of life.

When exactly did you fully immerse yourself into the lifestyle of juicing?

I would say probably about 10 years ago. Yeah, I’ve been juicing for a while.

Most people wouldn’t necessarily associate rapping and juicing. How did these two worlds come together in your life?

Well, you know, just being a rapper, moving around so much and living the fast life, I would always look for balance. Coming off the road, I would get some juice, some natural fruits in my system–just something natural to bring some balance.

Did you grow up with that kind of thinking or was it something you learned along the way?

We all grow up with our moms telling us to make sure to eat an apple a day and to eat the veggies. I think that thought leaves you sometime around [the age of] 18. I think my body kind of knew. I was always tired and I was already not getting any sleep. I would eat something and I would feel weighed down. I just started paying attention to my body, like I really needed to balance it all out.

Then as I started balancing, it became a way of life for me. I started changing from eating a lot of fast food, to eating a little bit of fast food, to I don’t eat fast food at all. So you know, it was an eye-opener for me, plus it helped me with my work. I lost a lot of weight. In the studio, it would be a lot for me to lay [a track] in the booth, because I would always get short-winded. After juicing, everything just became more open, the vision became clearer for me.

So what is your approach to encouraging people who aren’t necessarily interested in juicing to get into it?

By giving them the real, you know. I think a lot of people, especially when it comes to being healthy or living a healthy lifestyle, they look at it in a light like how people look at nerds. Like, it’s not “coolâ€ to be healthy. We try to change that mindset because your body is your temple. There is nothing more important than your body.

With [our customers] being a hip-hop crowd, we try to say: juice is cool, chicks are cool or dudes are cool–whatever sex you may be–cars are cool, nice gear is cool… all of that is cool. But it’s not cool, if you’re not in good health. Like, you can’t even begin to think about getting that or even if you do, you’re not going to [get the opportunity to] enjoy it if you’re not in good health. So we try to push them to understand basically that we are the future, our children are the future, and their children are the future. We’ve been doing this for a long time, as far as fast food and eating the wrong things, so it’s going to take a long time to get it back right. We just don’t hide the truth. When you get older, you’re going to wish you could do some of the things you were doing when you were young. By juicing up and coming here, that’s the way to do it.