Supreme Court Judge Says White Football Coach is 'Exercising Protected Speech' When Taking a Knee, But Many Ask 'What About Kaepernick? 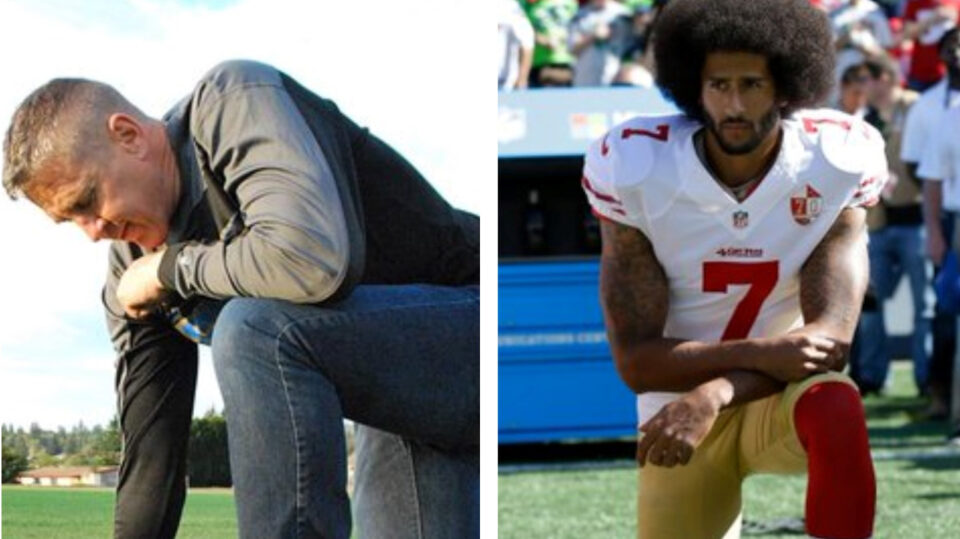 A case is currently in front of the Supreme Court after a high school football coach was fired for taking a knee and praying at the 50-yard line on the football field.

This incident occurred in 2015, although the coach had been doing so since 2008. But it became a bone of contention when an opposing coach reported his action.

According to CBS News, Joseph Kennedy, a high school football coach at Bremerton High School, a public school near Seattle, was terminated due to kneeling and praying.

The issue took flight on social media after conservative judges on the Supreme Court were sympathetic to the coach taking a knee on the field. Although his actions predate Colin Kaepernick taking a knee at NFL games, the mindset of people defending Kennedy’s right to do so is a stark contrast to the same people condemning Kaepernick for doing almost the same thing.

Amy Coney Barrett – “he’s exercising “protected speech” because he’s “only taking a knee.” So it’s okay to take a knee to pray; but Kaepernick taking a knee to peacefully protest police brutality is a bridge too far? Sounds about right. #FreshWords

When you take a knee in prayer that is religious freedom in honor and respect to God.

When #Kaepernick takes a knee for racial injustice that’s freedom of speech and the consequences are nobody will sign him NFL, USFL, XFL or otherwise. https://t.co/tsuaPijAUH

Barrett asked, “Even if he’s not communicating to an audience, so he’s completely silent, he just takes a knee. That’s protected speech.”

If only Colin Kaepernick got that kind of respect from SCOTUS

The hypocrisy in the GOP is astounding. They want free speech as long as it’s THEIR speech, not someone like Colin Kaepernick or a trans kid in school. They are the Party of bigotry + hate. Never inclusion.

If a coach kneeling on the football field to pray is considered an act of free speech, then what @Kaepernick7 did was also free speech. You cannot support one and not the other.

SCOTUS is hearing arguments about a former high school football coach who lost his job for praying at midfield after game.

Republicans are arguing it’s his constitutional right to take a knee on the field.‍♂️

The white man can take a knee in prayer on the football field Colin Kaepernick cannot. It’s simple and the Supreme Court will tell us all the difference.

I see a lot of the same people who vilified Kaepernick for taking a knee to protest police brutality and reveled when he was blackballed as a result, are now voicing their support for the HS coach who knelt in prayer. The hypocrisy is laughable.

That is true Colin Kaepernick deserves the same here we see total hypocrisy on display   pic.twitter.com/yvMMlTRh04

If only someone at the hearing could ask Amy Coney Barrett if Colin Kaepernick’s knee, likewise, is protected speech.