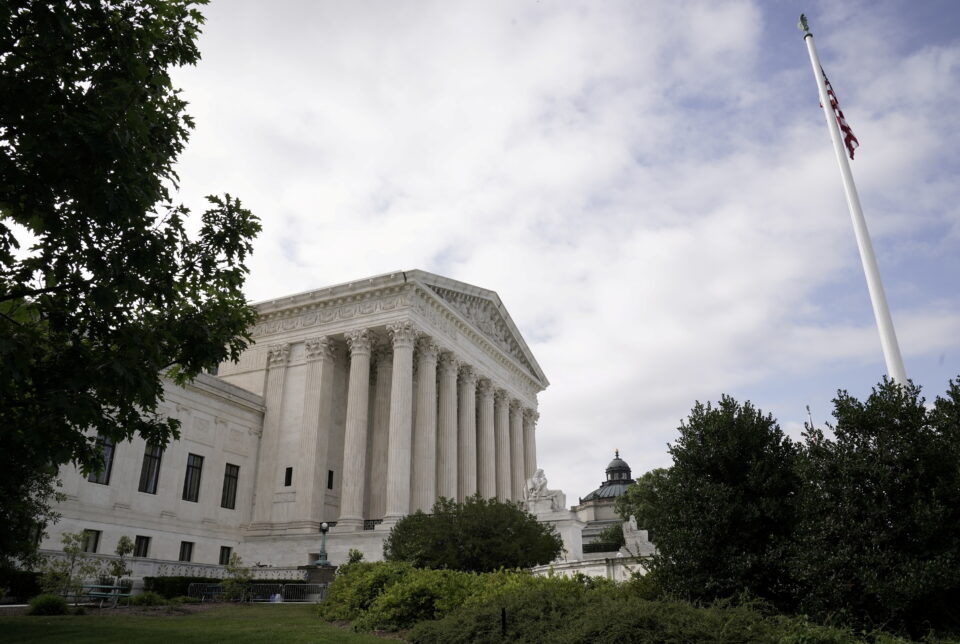 Reuters – U.S. Supreme Court justices took a step back toward normalcy on Monday on the first day of their new nine-month term as they conducted oral arguments in person for the first time in 19 months due to the COVID-19 pandemic, holding a muted and polite session in a socially distanced courtroom.

The court’s term includes major cases in the coming months on abortion and gun rights.

Eight justices appeared in person, wearing their traditional black robes as they entered the ornate and sparsely populated courtroom and sat behind the mahogany bench. One justice, Brett Kavanaugh, participated remotely after testing positive for the coronavirus last week, with his questions audible via speakers in the courtroom. Justice Sonia Sotomayor wore a black face mask, while the court’s other members present went maskless.

Monday also marked the first time that the court’s junior-most member, Justice Amy Coney Barrett, participated in an in-person argument. As is customary for a new justice, Barrett, appointed by former President Donald Trump last year to replace the late Justice Ruth Bader Ginsburg, sat on the far right of the bench and was last to ask questions.

The justices were joined by lawyers, court staff and journalists – all masked, except for the lawyers arguing the cases, and spread out among the rows of seats – in their spacious column-lined courtroom. No members of the public were present.

In the first of two arguments heard on Monday, the justices expressed skepticism about Mississippi’s claim that Tennessee is effectively stealing its water from an underground aquifer that runs beneath both states.

The justices appeared to have learned some lessons from their pandemic-prompted experiment of holding oral arguments via teleconference. They seemed to use some elements of that more structured approach, with justices careful to wait their turn before speaking, in contrast with the previous rough-and-tumble format in which justices competed with each other to get a word in.

At times, Chief Justice John Roberts, seated in the center of the bench, asked each justice in turn if they wanted to pose a question. Roberts also conferred with the justices sitting on either side of him: Clarence Thomas and Stephen Breyer.

Thomas, who famously almost never spoke during in-person oral arguments in the past, had regularly participated during teleconference arguments – and quickly asked the first question of the new term, indicating he will continue to be a vocal presence.

Monday’s second argument was a Georgia criminal case involving a man convicted of being a felon possessing a firearm.

The court building has been closed to the public since March 2020 due to the pandemic.

Another change embraced by the tradition-bound court is live audio of oral arguments, a practice it had rejected until the pandemic spurred its use in May 2020. That practice continued on Monday.

Before hearing arguments, the court acted on some appeals.

It cleared the way for New York to collect a $200 million surcharge imposed on opioid manufacturers and distributors, ended Oracle Corp’s challenge to how the Pentagon awarded a now-canceled cloud computing contract and declined to hear a New Jersey case involving a legal defense that often protects police officers from accusations of excessive force.

The court, which has a 6-3 conservative majority, has come under close scrutiny after on Sept. 1 allowing a Texas law that bans abortion after six weeks of pregnancy to go into effect.

Among the cases the justices are due to hear during their new term is a challenge set to be argued in December to abortion rights involving Mississippi’s bid to revive a Republican-backed state law banning the procedure after 15 weeks of pregnancy. Mississippi has asked the justices to overturn the 1973 Roe v. Wade ruling that legalized abortion nationwide.

A few dozen people attended an anti-abortion rally outside the court. Father Frank Pavone, national director of a group called Priests for Life, led a prayer calling for the end of abortion He mentioned Trump’s three conservative Supreme Court appointees.

“All three, we are confident, will rule the right way,” Pavone said.

The justices are scheduled in November to hear a challenge backed by the National Rifle Association to New York state’s restrictions on people carrying concealed handguns in public in a case that could further undermine firearms control efforts nationally.

All nine justices, three of whom are over age 70, have been vaccinated against COVID-19, which has proven to be particularly dangerous among the elderly.

They are being tested regularly, as well as others who attend the oral arguments. Although Kavanaugh tested positive for the coronavirus last week, the court said he had no COVID-19 symptoms. Written guidance for lawyers requires them to be tested for the coronavirus but there is no vaccine requirement.

(Reporting by Lawrence Hurley and Andrew Chung; Editing by Will Dunham and Scott Malone)