Survey: 1 in 5 Americans Have More Than $20,000 In Credit Card Debt Because Of Pandemic 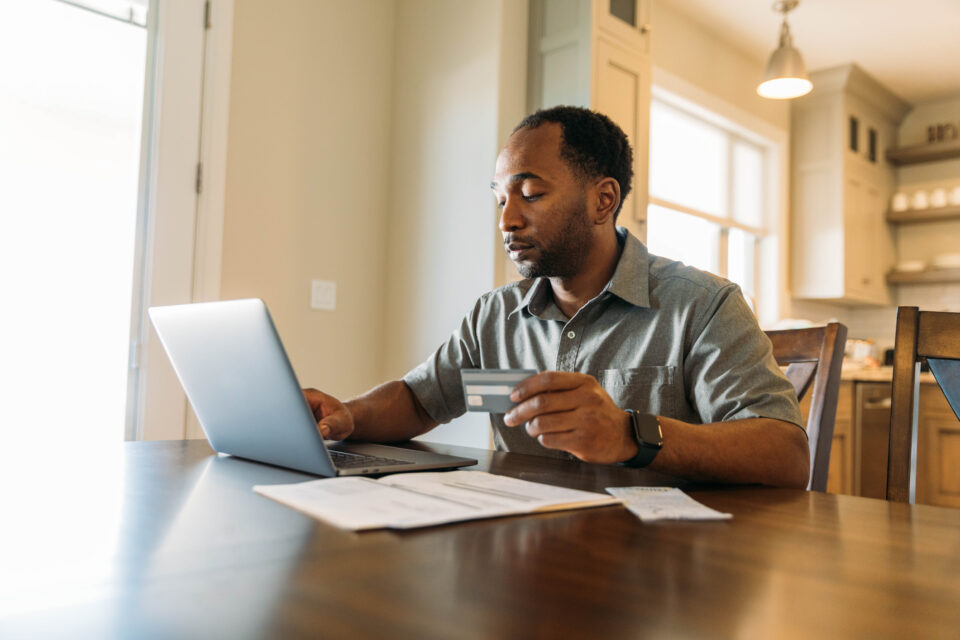 A middle-aged man sits at his dining room table with his paying his bills and banking using his mobile phone and laptop. He is using his credit card for his online banking and paying of bills.

If making financial ends meet was not already a big enough pain, COVID-19 has made matters worse. The dreadful crisis is now rearing its ugly head where it stings people the most: their wallets.

Those are among the jolting findings of a survey done in July 2021 of 1,000 people, as reported by Clever Real Estate, which reveals how drastically Americans have fallen into credit card debt. Respondents, including 10% that were Black, were asked how COVID has impacted their personal finances.

Dive into a few of the dire statistics: People who carry a credit card balance from month to month are 2.2 times more likely to say they have more debt now than before COVID. Some 40% haven’t been free of credit card debt since before 2018. Some 3% of Americans with credit card debt find it difficult to get ready for life events such as emergencies and retirement.

Clever Real Estate reports that global debt has reached record highs, with the pandemic extending into another year. That is a U-turn from the pandemic’s earliest days when broad lockdowns cut consumer spending. According to the Consumer Financial Protection Bureau, credit card debt steeply declined through May 2020 but began climbing again in August as emergency financial aid programs ended.

Further, the credit card snags came although roughly 51% and 49% of Americans, respectively, used their second and third federal government stimulus checks to pay off debt. COVID-19, illness or medical emergency, supporting a family member financially in the same household or outside of it, and job loss are among the top reasons why Americans are staying in credit card debt.

And to boot, this existing credit card debt issue could pose problems for Black Americans, primarily because they typically are impacted more than other groups when meltdowns occur.

She says the implication here is that Black Americans are more likely to carry credit card balances from month to month and have more difficulty paying down debt over time.

Ortegren added that carrying credit card debt can easily snowball as interest adds up and minimum payments get larger with higher balances in many cases. If someone can’t cover the minimum payment (or misses a payment, additional fees and penalties can add to the ever-increasing balance.

“Over time, this can be detrimental to Black families’ ability to build wealth and pass wealth on to future generations,” she says.

To help credit card users better manage or erase the debt, Ortegren suggests paying at least the minimum monthly payment to avoid fees and paying extra when financially possible. She recommends contacting your lender. Many of them are willing to work with their customers to ensure repayment by setting up repayment plans that minimize additional fees, for example.

Credit card users might do well to apply these tips from experts. Pay higher interest rates cards first. Never pay a card late as this could bring a higher interest rate and a late fee. It could add more debt to your account and reduce your chances of getting a lower-rate card in the future. Use online apps to track your accounts better, know the available credit you can use for purchases, and most importantly, remind you when the bill is due.