Susan Rice Withdraws Name From Consideration for Secretary of State 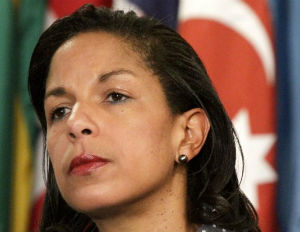 United Nations Ambassador Susan Rice has pulled her name out of consideration for nomination as the next secretary of state.

“If nominated, I am now convinced that the confirmation process would be lengthy, disruptive and costly — to you and to our most pressing national and international priorities,â€ Rice wrote in a letter to President Obama first obtained by NBC News.Â “That trade-off is simply not worth it to our country…Therefore, I respectfully request that you no longer consider my candidacy at this time.â€

President Obama responded in a statement of his own, saying that he is “gratefulâ€ that Rice will continue to serve as ambassador to the United Nations and as a “key memberâ€ of his national security team.

“While I deeply regret the unfair and misleading attacks on Susan Rice in recent weeks, her decision demonstrates the strength of her character, and an admirable commitment to rise above the politics of the moment to put our national interests first,â€ Obama said. “The American people can be proud to have a public servant of her caliber and character representing our country.â€