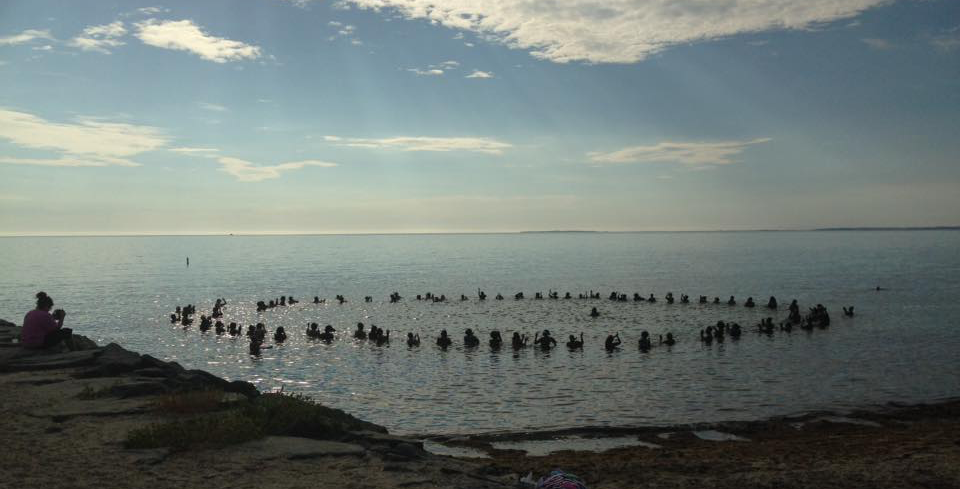 A group of travelers set a new record for attendance at the historically Black Inkwell Beach on Martha’s Vineyard.

More than 160 people gathered at the beach’s shore early Thursday morning to take the “polar bear plunge.” The group, mostly made of people familiar with the tradition, ranged from ages 18 to 70 and older, according to Travel Noire.

Newcomers who were experiencing the tradition for the first time were inducted as “polar bears” after joining the circle of 164 swimmers gathered in the water. They were given cards as a token of remembrance for participating in the special moment.

The gathering began in 1947 when the guests of Black innkeeper Myrtle O’Brien started going down to Inkwell Beach for a dip. A group of nine Black swimmers made up the original group, who would swim from the beach’s shores to a nearby ship deck and back.

During the time of segregation, many Black travelers felt safe at the beach.

While the group began to grow, another one made of swimmers who were less skilled formed and became known as the “polar bears.” Gathered in a circle, they focused on simply getting Black people active in the water.

The beach’s name was originally a derogatory reference given by nearby white beach goers because of the number of Black swimmers who swam on the beach in the late nineteenth century.

It’s now a big tradition for HBCU alumni to visit during the month of August.

Winston Robinson and his wife, Quiana, were part of the record-breaking plunge. The couple, based in Charlotte, North Carolina, came down after a friend and Howard University alum recommended the visit.

“We honestly didn’t know what to expect,” Winston told Travel Noire. “But, I’m so glad we were a part of this. It has added so much value to my perspective.”

The couple described their experience as life-changing. For the first 30 minutes, they did water aerobics followed by the record-breaking attendance count. They wrapped up with some freestyle dancing in the water.

During their exercises, Caroline Hunter, who led the group, honored polar members who’d passed away in the last year. One member died from cancer and the other from suicide.

“She talked to us about the importance of taking mental health seriously,” Quiana said.