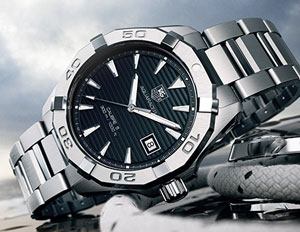 TAG Heuer's smartwatch could be an Intel-powered device set to compete with the Apple Watch. (Image credit: TAG Heuer)

This January could see an influx of high-tech smartwatches from low-tech watchmakers.

At the Las Vegas Consumer Electronics Show, French watchmaker TAG Heuer could debut its answer to Android Wear and the iOS-powered Apple Watch with an Intel-powered wearable.

TAG Heuer, one of many watch brands under French luxury group LVMH, made headlines in September when Jean-Claude Biver, head of LVMH’s luxury watch brands (including TAG Heuer, Hublot, and Zenith), commented on the design of Apple’s newly revealed smartphone accessory, the Apple Watch. “This watch has no sex appeal,” said Biver, according to The Economic Times. “It’s too feminine and looks too much like the smartwatches already on the market.”

Biver did say the company was debuting a smartwatch next year, and according to Business Insider this is still the case.

Originally TAG Heuer was rumored to be working alongside Apple during the development of the Apple Watch.

Its smartwatch will differ from the current crop of smartwatches, and will look like a more traditional timepiece rather than a futuristic accessory. It will be similar in style and function to Withings and its ActivitÃ© fitness watch.