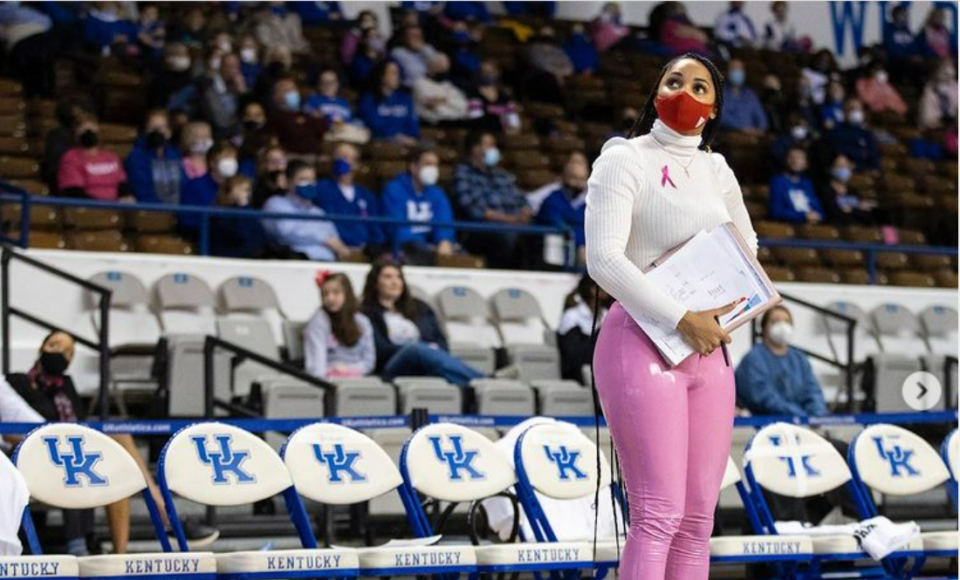 Twitter came to the rescue after Sydney Carter, Texas A&M’s player development coach and assistant recruiting coordinator, caught some heat for her outfit while on the sidelines during a university game.

The former Texas A&M basketball player is well-admired for her fly business attire during games.

However, on Feb 7, Carter posted a photo on Twitter of her in what seems to be pink patent leather pants, a white turtleneck and heels. A pink ribbon, symbolizing breast cancer awareness, was pinned to her top and could’ve been the reason why she decided to rock the pants. In the photos, players can be seen sporting pink socks and sneakers as well. Clearly, the theme was intentional.

While many social media users praised the coach for her fit, Wayne Walker, a Facebook user, posed the question, “Is her outfit appropriate as a basketball coach?”

One Twitter user posted Walker’s question, and asked in response, “What’s wrong with it???”

What’s wrong with it??? pic.twitter.com/6zGxA8SrQv

Another Twitter user defended Carter’s outfit. In fact, she noted that “every time a [B]lack woman does something, people need to judge her for that.”

NOTHING. Like, her outfit is totally appropriate, and this shouldn’t even be a discussion. Why does everytime a black woman does something, people need to judge her for that. I mean, some of the comments are.. and they’re by other black women pic.twitter.com/ixpa5fjjG0

Kayla Grey, a Canadian television sportscaster, stood in solidarity with Walker by posting a “range” of Carter’s sideline swag.

Someone else commented that the topic of appropriate or inappropriate work attire has been discussed many times before on the internet.

Fam we can’t keep falling for the same engagement tricks.
The internet has argued this topic to DEATH in every work place.
Long story short, she has a curvy body with an outfit on that allows it to be visual in a space where we don’t normally see it. That it. NEXT TOPIC PLEASE.

In what seems to be a clap back, Carter posted a single photo of her during game 22, quoting Nicki Minaj’s lyrics in “Do We Have A Problem”, featuring Lil Baby.

Following her playing time with A&M from 2008-12, Carter was drafted in the third round of the 2012 WNBA Draft as the 27th overall pick. She went on to play for four years, as well as six years overseas.