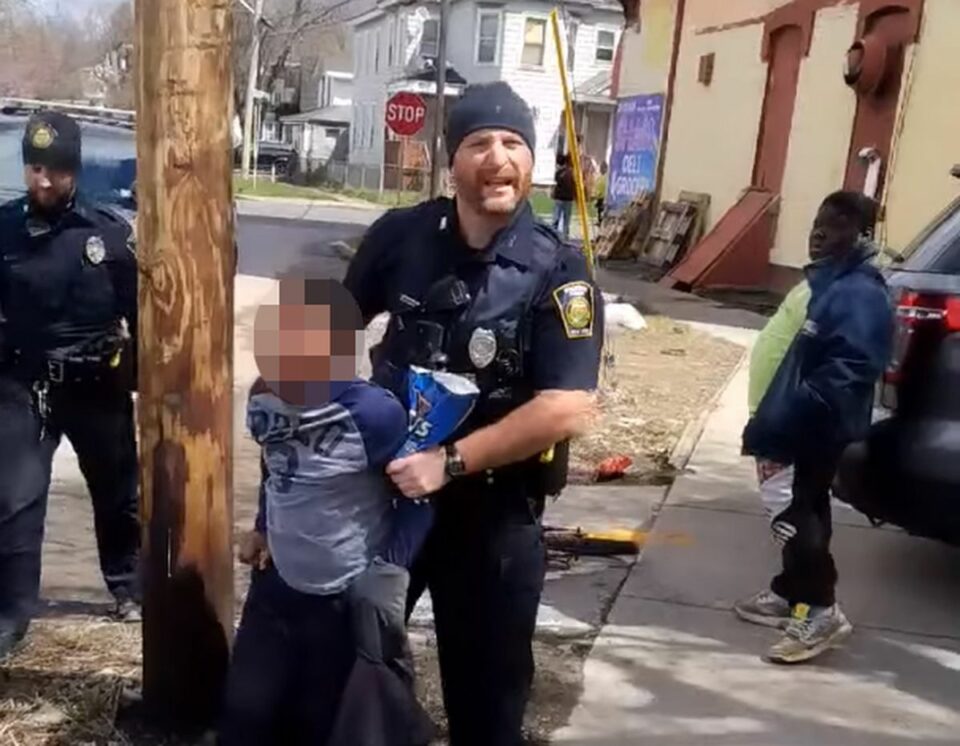 Video of officers putting a crying 8-year-old boy into a squad car in Syracuse has led to an investigation and has sparked debate about the police department's relationship with residents. (Image: Twitter)

The Syracuse police are under fire after a viral video showed multiple police officers putting a crying 8-year-old boy into a squad car after allegedly stealing a bag of chips.

The video quickly went viral hitting 5 million views by Wednesday morning. The one-minute clip begins with a man off-camera asking the officer holding the boy what police are doing before commenting that the child “looks like a baby to me,” the NY Daily News reports.

Syracuse police really ? Over a bag of chips ? He’s just a kid. pic.twitter.com/DNOwcuUsvf

Another officer quickly appears, telling the man taking the video: “He’s stealing stuff. If he breaks into your house and steals something,” before he was cut off.

“Y’all treat him like a hardcore, blooded f—— killer,” the man replied.

The officer says: “Keep walking dude. You don’t even know what you’re talking about.”

The incident has once again led to a discussion about the excessive force used by police against Black residents in the U.S. The Syracuse Police released a statement on Twitter about the incident in response to the backlash.

“We (SPD) are aware of a video being shared on social media involving several of our Officers and juveniles accused of stealing from a store on the City’s northside. The incident, including the Officers’ actions and body-worn cameras, are being reviewed,” the statement said. “There is some misinformation involving this case. The juvenile suspected of larceny was not placed in handcuffs. He was placed in the rear of a patrol unit where he was directly brought home. Officers met with the child’s father and no charges were filed.”

Walsh did not discuss any discipline the officers involved could face and added the incident “demonstrates the continuing need for the city to provide support to our children and families and to invest in alternative response options to assist our officers.”

NBC affiliate WSTM spoke to the man who took the video and offered to pay for the chips.

“I felt his terror and decided to intervene,” the bystander, Kenneth Jackson, said. “There’s a way that the police need to interact with kids, and what they did that day was completely unacceptable,