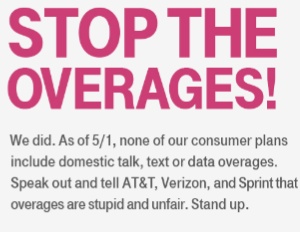 Outspoken T-Mobile CEO John Legere is asking the world to stop phone companies from overcharging consumers, with a petition.

If you’re on T-Mobile, your service may get a bit cheaper.

The wireless carrier’s CEO, John Legere, announced on Monday an end to overage charges on the “Un-carrier,” a nickname given to the company and its unorthodox tactics aimed at lowering prices for consumers while increasing cellphone coverage and speeds.

“The first year of Un-carrier has been terrific, but it’s going to pale in comparison to what lies ahead,” Legere said in a blog post. “Today, we’re taking the change to a whole new level. We’re capping off these past few days by ending overages for all customers on T-Mobile consumer plans.”

Legere also started a Change.org petition, encouraging people to sign it and show their disapproval of overage charges.

John Legere is one of the more famous CEOs in the telecom industry, thanks to his outrageous behavior and cost-cutting measures that have spurred other carriers to respond in kind.

For example, T-Mobile introduced its Jump phone upgrade program in July of last year, with companies like AT&T and Verizon responding with their own upgrade plans, making the customary 24-month wait period for phone upgrades a thing of the past.

T-Mobile’s mostly eliminated overage charges already, thanks to its Simple Choice plans that provide unlimited talking and texting, and data that slows after using the amount chosen on your plan.