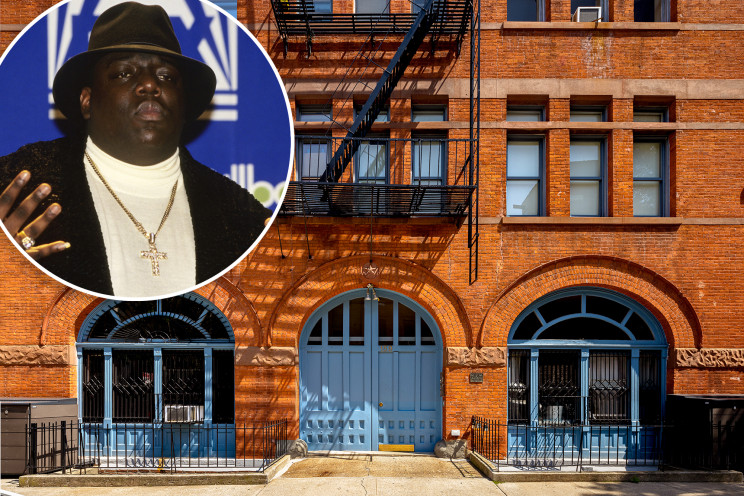 Notorious B.I.G's former Brooklyn apartment is on the market for $1.7 million. (Compass)

The apartment Notorious B.I.G. lived in during his rap career and before his death is on the market for $1.7 million—and it’s all good in his old Brooklyn neighborhood.

Christopher George Latore Wallace, known as Biggie Smalls, owned the Brooklyn apartment in 1994 where he resided with his wife, Faith Evans, and her daughter, Chyna Tahjere Griffin, The NY Post reported.

The legendary Mo Money Mo Problems rapper released one of his most notable albums, Ready to Die, while living in the home. He was fatally shot by an unknown shooter a few years later in 1997 while in Los Angeles.

Located in the Fort Greene neighborhood, the apartment is a two-bedroom, two-bathroom duplex just blocks from a street named after the musician.

Throughout the city, one can find depictions of Biggie in street art and murals. He grew up in a Clinton Hill apartment at 226 St. James Place. According to The Post, the “one-room shack” now rents for more than $4,000 a month. It was also featured in the documentary, Biggie: The Life of Notorious B.I.G.

The current owner of Biggie’s former Fort Greene home is Caroline Duncan, a notable costume designer whose works include The Affair and When They See Us.

Duncan renovated the home after purchasing it in 2011. The “chic, artistic haven” now features a custom library, walk-through closets, and tons of lofted space.

“When I moved in, the basement was just a raw space with concrete floors,” Duncan told The Post. “I framed and put up all the walls and created a bathroom with barn wood and modern finishes, a massive walk-through closet to showcase my collection of clothing and accessories, a laundry room and bedrooms.”

“Upstairs had been carved into a series of puzzling small rooms, so I did the opposite and knocked down all the walls to create a lofted open space,” she continued. “I loved the neighborhood, the proximity to Fort Greene Park, the fact that the building is on the Historic Register and had the bones of a true artist’s residence.”

Take a look and get “hypnotized” by this plush $1.7M pad formerly owned by The Notorious B.I.G.