What Does It Take to Make a Virtual Reality Film? (Part 2 of 2) 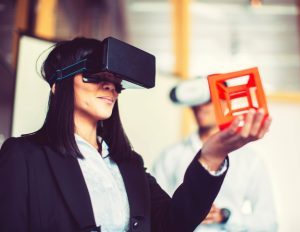 So, you’ve seen what it’s like inside of a virtual reality headset during Part 1 of our Making the Virtual Reality Film With Director Alton Glass series, but what is the process like to actually make a virtual reality film?

In Part 2, you will come to understand the makeup of the cameras themselves, and how they are put together to form the 360 image.

“Most 360 cameras are combining multiple cameras to form one image,â€ said Tims Johnson, owner of Blacklist Digital. “Typically, there will be different style cameras with a fish-eye lens. Each direction is photographed and, in post-production, we stitch them all together to create the 360 video.â€

In Part 3 of the video series, we cover the extensive post-production process, explaining what happens after the footage is shot.

“The heavy lifting happens on workstations. That’s where we assemble all of the footage and do the stitching,â€ said Johnson. “While on set, you make your dailies, then you go to editorial. So, it’s kind of like a classic editorial, where you’re working with a single string, out; then you do your editing. Then, we come into final stitching, and end here–that’s when you set the final look and color.â€

“When VR first sort of kicked off, stitching was the hardest part for people to wrap their head around. Now, they make different programs, like Nuke. It’s a much faster and more robust system, but stitching is essentially taking all of the cameras–it could be eight, it could be six, it could be twenty–and they stitch them all together. That way, when you look around, they are all blended together, and there is nothing missing in the seams,â€ said Director Alton Glass.

Virtual reality is a new visual phenomenon that is quickly approaching normality. In the next few years, there is no doubt that it will become the replacement forÂ how we all view content. So, why not be ahead of the curve and understand how it’s produced, to better positioning ourselves as potential content creators?

In case you want to see the full version, check it out below:Â