Taking a Look at Voter Suppression Throughout History 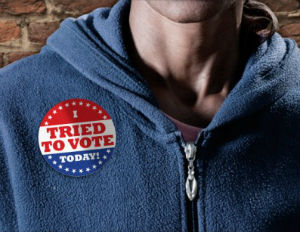 Over the past few years, lots of states, most of which were controlled by Republicans, Â have passed laws ostensibly meant to root out voter fraud. But study after study shows that voter fraud never happens, and many of the Â laws would make it harder for lots of people to be able to cast ballots. Voting rights advocates don’t think this is a coincidence: turnout among blacks and Latinos could decide many crucial states on Tuesday, and those groups are the least likely to have the kinds of documentation now needed to vote in many states.

But this isn’t new. Mother Jones has put up an interactive timeline of disenfranchisement in the United States, and finds a practice that goes back to the nation’s founding. Over 250 years, jurisdictions have denied the ballot to people who didn’t own land, people who looked like they might have black ancestors, people with Chinese ancestors, Â women, “idiots and insane persons,” non-English speakers, and felons.

Now that (most of) those things have been declared unconstitutional, challenges to voting rights happen via practices like voter caging and challenging in-person voters, MoJo reports.