Taking a Page From Obamaâ€™s Book 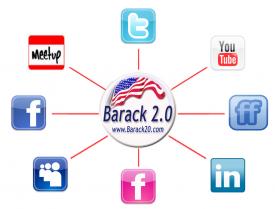 In January 2007, a junior senator from Illinois announced his improbable candidacy for the presidency of the United States. Thought of as a long shot for even the democratic nomination, Sen. Barack Obama proved the doubters wrong in June 2007 when he took home a stunning victory over New York Sen. Hillary Clinton. A few months later, Obama made history when he was voted in as the first African American president of the United States.

Some say a solid Internet presence and a knack for making his political constituents feel like they were a part of history helped Obama prevail over more well-known politicians who employed traditional campaign strategies. In their new book, Barack 2.0 — Barack Obama’s Social Media Lessons for Business (and the accompanying online interactive companion), authors Brent Leary and David Bullock explore the secrets of the president’s success and show the value of using similar strategies in the business world. (Read excerpt.)

Leary and Bullock walk business owners through the key technology tools that Obama used in his campaign, and tell how companies can apply them in their own operations. “The president and his team used blogs, podcasts, video and other forms of social media to share his message of change and hope in order to meaningfully connect with voters,â€ says Leary. “The approach moved many new people into the political process, and brought back others who had become disillusioned with it, to donate hundreds of millions of dollars — little by little — and to eventually stand in line for hours to vote.â€

Leary, who has written for BlackEnterprise.com and was recognized by InsideCRM as one of 2007’s 25 most influential industry leaders, says many companies face the same challenges that Obama did during his run for the candidacy and the presidency: high competition and high expectations for success. And while social media tools such as networking sites (Facebook, Twitter, etc) and strategies such as podcasting and blogging can help overcome some of those obstacles, Leary says most companies approach them the wrong way.