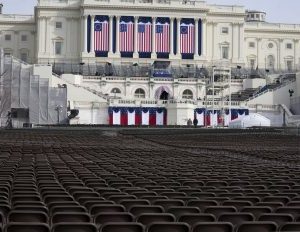 Despite criticism from many in the black community, including many of its own alumni, Talladega College has committed to having its marching band, the Marching Tornadoes, participate in the inauguration of Donald Trump on Friday, Jan. 20.

It is doing so with the blessing of Hampton University President William R. Harvey, a Talladega alumnus.

“It will be a wonderful learning experience for the students in the band. It will be a teachable moment for them to understand the importance of supporting the leader of the free world, despite one’s political viewpoint,â€ Harvey said in a statement. “After all, the reason for being in any college or university should be to promote learning and not to enhance a political agenda.â€

The Marching Tornadoes had set a modest goal of $75,000 to cover the band’s transportation, meals, and lodging expenses, but with support from a wide range of people, including a couple with an Italian last name who referred to themselves as one of Trump’s “Deplorables,â€ the college has, as of today, raised $624,119.

Since the band has met its goal, the continued financial support seems to be sending a message. Several people simply congratulated the band and wished them well on the historic day. Others wrote passionately of their support for people of all colors and huesÂ and pleaded with others who expressed anger at the band’s choice.

One supporter wrote, “Be part of history and leave your own political agendas at home. We will be looking for you. Have fun.”

The Peaceful Transition of Power

Talladega took time to consider the invitation and sought out the views of the Talladega College community before agreeing to participate.

“We respect and appreciate how our students and alumni feel about our participation in this parade,â€ said Talladega President Billy Hawkins in a statement. “As many of those who chose to participate in the parade have said, we feel the inauguration of a new president is not a political event but a civil ceremony celebrating the transfer of power.â€

Like Hawkins, Harvey sees the opportunity through the lens of history. “In my view, it is an honor to be invited to the inauguration of any president of the United States. The college and its band are celebrating the peaceful transition of power–a hallmark of America’s democracy and swearing in of a new president,â€ Harvey said.