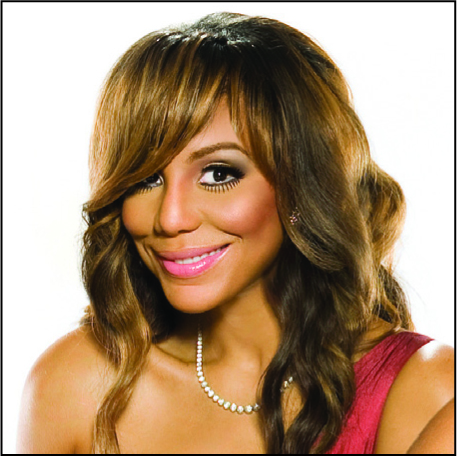 Tamar Braxton might not be everyone’s cup of tea, but her new legion of fans “live for her!” Since the debut of the reality series Braxton Family Values, the singing (and bickering) clan of Braxton sisters has earned devotees that are eagerly awaiting their refill of family drama. Yet Tamar, inventor of dot-com-isms and the youngest and most vocal of them all, has America addicted with every bit of her candor, unadulterated humor and larger-than-life confidence.

As Tamar prepares for the new season of The Braxton Family Values (premiering Thursday, November 10, at 9pm EST on We TV) BlackEnterprise.com chatted with her about sibling rivalry, why hubby Vince Herbert no longer manages sister Toni, and whether or not there’s any truth to those skin bleaching rumors.

BlackEnterprise.com: First off, let us ask how your hubby [Vincent Herbert, who suffered a pulmonary embolism] is recovering since returning from the hospital.

Braxton: Yes he is fine, thank you.

BlackEnterprise.com: Glad to hear he’s on the mend. We are so happy to see The Braxtons return for a second season. What are we in store for this season?

Tamar Braxton: The Braxtons on steroids (laughs). I think the first season was a very true introduction to who we are and everybody has grown up a bit. This season, again, it’s The Braxtons full on steroids and there are times that I thought, I can’t believe we said that. So people will get a closer look into each of our personal lives this season.

BlackEnterprise.com: So how has reality TV stardom benefited your career?

Braxton: It’s definitely different now. People are curious about how I sound and want to do a record to find out if my big personality is the [real deal] (laughs). But I’m pretty much the same person. I think that’s a great combination. I’m even more excited being myself. I am not a character that I made up. Who I am is who I am.

BlackEnterprise.com: What kind of offers have you received?

Braxton: It’s been a lot of things, but none of them are the right fit for me. Yes I do act, but it’s not what I’m focused on right now. I’m open to it, but again, that’s not the goal right now. So I’m not the attention whore that people think I am. If it doesn’t have anything to do with my sisters, it’s not right…

BlackEnterprise.com: Do you think that the attention you’ve received has caused some sibling rivalry?

Braxton: At first I did, and it was very difficult for me because I would get accused of acting like a prima donna. But I’m like, if y’all think about it, I’ve been making the same faces since I was about 2 [years old]. I think the problem is when you see it on TV it’s magnified. I believe it was difficult for my sisters to watch it and they became defensive. But again, I’ve always been candid and honest. I believe everybody is back to normal and it was more of the surprise the first season.

BlackEnterprise.com: Speaking of which, you had a heated argument with your mom this season who told you she’d “slap the piss out of youâ€ if you ever disrespected her again. What were you thinking in that moment?

Braxton: At that moment I wasn’t embarrassed, but I was definitely shocked and upset. I was thinking, where is this coming from? I didn’t feel, and still don’t feel, I did anything wrong. Because I felt myself being disrespectful I had to [leave]. I didn’t understand the conversation or why we were having a conversation in the first place. Toni and Tracey said I had a problem with singing background, but I’ve always said that I’m blessed and grateful and that it was a start on my career path. However, that’s not what I want to be everyday of my life. It’s okay to change career paths.

BlackEnterprise.com: Do you think their issue with you was because they found out you had done a single through a third party and not directly from you?

Braxton: No, let me remind you, I’ve always said I would do my own record in the first season. When we all came together and talked about doing The Braxtons album, I said, ‘If [Toni’s] gonna do her own record, so am I.’ I didn’t feel I had to call everybody to tell them I was starting my record. When I said to them, ‘Don’t you remember?’ They said, ‘Oh we forgot.’ So I wasn’t trying to be sneaky. I just don’t think I have to give everybody a play-by-play when I’ve already told them [my plans].

BlackEnterprise.com: Understood. So will your hubby serve as your manager?

Braxton: At this point he does, but it’s tough because I’m his wife and sometimes it’s hard to separate the two. When we have date-night he doesn’t want me to talk about work, but I’m like you can’t just cut off and you have to let me know because I have issues I need to discuss and things to figure out [regarding my project]. (Laughs). So it’s a work in progress and we’re working through how to balance it all.