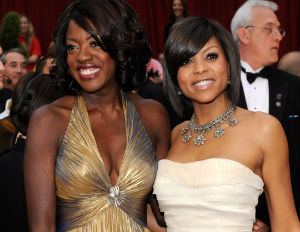 “I never really got into acting for awards because it’s weird when you try to compare art,” said Henson during an interview with The Hollywood Reporter.Â “I just have to stay focused.” However, she said she was “grateful” and “honored” to receive the nomination. “I know that this is something that a lot of actors can’t say.”

During a round-table interview withÂ The Hollywood Reporter, Davis talked candidly about her fear of taking on the lead role in the series How to Get Away With Murder (HTGAWM).“It was one of those things where IÂ had no precedentÂ for thisÂ role. I had never seenÂ aÂ 49-year-old dark-skinned woman, who isÂ notÂ aÂ size 2, be a sexualized roleÂ inÂ TV,Â film,Â everywhere,”she said. “When I actually saw myself for the first time in the pilot episode, I was mortified,” she explained. “I saw the fake eyelashes. I saw the wig. I was like ‘Are you kidding me? Who’s going to believe this?'”

Well, in light of the recent Emmy nod, Hollywood is ready to start recognizing theÂ influence of African Americans on TV, film and in entertainment.

“This was truly a remarkable year in television,â€ said Rosenblum during a statement released by Emmy.com. “From the 40th Anniversary of Saturday Night Live, to David Letterman’s retirement and the conclusion of Mad Men, television’s creativity, influence and impact continue to grow and have never been stronger. From broadcast, to cable to digital services, our industry is producing more quality television than ever before. Television is the pre-eminent entertainment platform with extraordinarily rich and varied storytelling. The work of our members dominates the cultural discussion and ignites the passion of viewers around the world. All of us at the Academy are proud to be honoring the very best in television.â€

Here are a few other African Americans nominated for Emmy awards:

The 67th Primetime Emmy awards airs on Fox on Sept. 20 at the Microsoft theater in Los Angeles, California, and will be hosted byÂ Andy Samberg, star ofÂ Brooklyn Nine Nine.