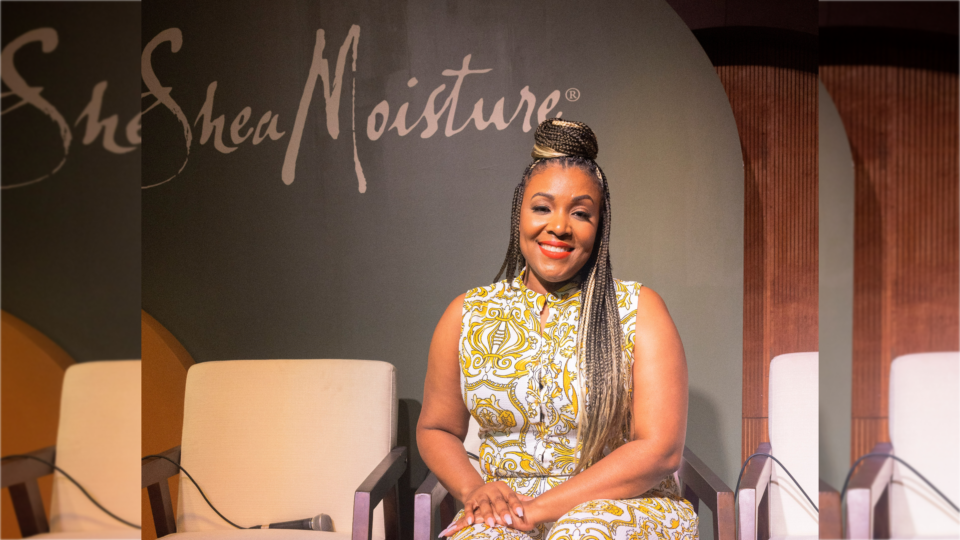 At its core, SheaMoisture is doing more than moisturizing the kinks and coils of people of color through its line of haircare products.

The company is committed to conditioning the lives and livelihood of Black business owners, and recently announced three winners of its Next Black Millionaire Fund at the Essence festival.

SheaMoisture is  nourishing Black entrepreneurs through a partnership with New Voices Foundation, in an effort to address the barriers that exist for Black business owners who are often left at the bottom of the financial totem pole.

Not only that, but Black entrepreneurs are at a considerable disadvantage when trying to find funding for their businesses. In fact, many small businesses, including Black-owned ones, are dealing with the lingering effects of the pandemic and 40-year high inflation.

According to reports, there is an $11 trillion wealth gap, and the Next Black Millionaire program exists to close the gap and extend $100,000 in micro-funding to advance three Black entrepreneurs on the rise.

Each of the three winners will receive $100,000 in innovation seed funding, access to executives who will share their recipes for success, and mentorship and coaching from the New Voices Foundation. In addition, the three winners will be featured in a planned docuseries that started during Essence Fest, capturing the momentous journey the entrepreneurs are about to embark upon, with the support of leaders from SheaMoisture and the New Voices Foundation.

BLACK ENTERPRISE sat down with Taydra Mitchell Jackson (head of marketing of Sundial Brands), to talk about the company’s commitment to creating Black wealth and playing a vital role in advancing racial equity across the spectrum, while centering its mission on elevating talented Black entrepreneurs in the Black community.

Taydra: Yeah. So it really goes back to the SheaMoisture impact report, which is coming out. Right? So one of the things that we saw, especially if you think about, like, post-George Floyd, when all the companies jumped in and started talking to all the things they were going to do and all the give-back they were going to do, there was a lot of discussion around investments community pieces, but SheaMoisture has been investing in the community since the beginning. So part of it was, okay, there’s a lot of chatter around what’s happening, but we want to validate and really show our community and the industry, what we’ve really done, but we need to make sure that we’ve got the evidence. So we did that.

So creating… Not that they came in as millionaires…

No, they came in as wherever they are.

And so then the question became, well, how do you take that to the next level?

So can we put a system in place where we can now show people, this is how you get there. Right? It doesn’t mean that everybody will hit the millionaire status, but it means that we’ll be able to show people here’s how you start with your concept. Here’s how you look through your network. Here’s what happens when you need distribution. Here’s what happens when you need to fund a purchase order. All these things in business that can be mystical, we’re demystifying. And we’re giving people a really high-level aspiration. So that was the inspiration and aspiration behind the next segment.

Okay. Not that I want you to give up any secrets, but it’s such a crowded market with the hair care business. How are you guys able to sustain this level of success and do well and form these partnerships where they’re (corporations) looking at you and not going to this brand or that brand, because they value you?

That’s a really good question. I mean, I think number one, we’ve tried to establish that this is something that’s extremely authentic for us. So I think one of the reasons that we have these conversations is not because we’re trying to boast about the number of people that we’ve impacted or even the cooperatives, like the things that we’re doing. It’s really about ensuring that people know this is who we are. This isn’t just a story, but this is who we are. So I think the authenticity and the understanding that this is a part of our DNA is a really important part of that because it attracts people to us. It attracts the businesses that come and say, hey, I saw what you did for that company. How do I become a part of your ecosystem? How can I become one of your beneficiaries?

I think they see the authenticity. I think the other thing is that we are high touch. So SheaMoisture is not just talking about… You don’t just see a social post, right? We’re in essence posting three days of workshops and panels talking about what you do for your business. As a part of what we do, in Essence, we’ve got five or six businesses that are our beneficiaries that we say, here, this is how we prop you up. They didn’t have to pay to be here. They’re here because we want to support them. And they want people to invest their dollars in them. So I think part of it is walking the walk. I think we’re so high touch that we come into the community and people know that we’re real.

Creating community, because that’s what I feel. And not only that, but I feel that with you. You’re authentic, let’s just say that. So you’re not just talking the talk, you’re walking the walk, which is wonderful.

And I think that’s something… And I appreciate that. Thank you. But I don’t think it’s something that companies… You can’t replicate that.

Wonderful. That’s good to bring men into the fold.

So our men can have exposure in the marketplace. She’s ensured that the brands that we do business with have a place at Essence. And she really is the visionary behind Next Black Women Millionaire Fund. I mean, one of the visionaries behind it. So I think the other part is that we don’t keep the success or the light for ourselves. We share the light. So when you write something, just make sure you give a shout-out to someone.

I’m looking around and seeing her fingerprint.