Teaming up to Fight Prostate Cancer 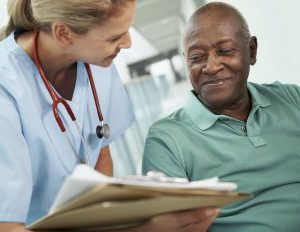 Though we’ve made strides in treating prostate cancer, these are the not-so-fun facts about the disease: One new case occurs every 2.4 minutes. And every 19 minutes, a man dies from prostate cancer. One in three men with a family history of the disease will be diagnosed with prostate cancer. According to the American Cancer Society, about six in 10 prostate cancer cases occur in men older than 65. It is the second most common cause of cancer-related deaths among men in the United States.

Prostate cancer is also a very slow-growing cancer, with many men who have it dying of other causes.

So in 2011, the U.S. Preventive Services Task Force, in what it called a move to curb over-diagnosis and overtreatment of prostate cancer, issued guidelines recommending against routine prostate-specific antigen testing. The uproar over the revised guidelines wasÂ particularly not helpful for black men, who face a greater overall risk for the disease than men of other races. They also have the highest risk for aggressive forms of prostate cancer and death.

The Urology Care Foundation and the National Football League teamed up on the Know Your Stats campaign to raise prostate cancer awareness.

A few months ago, Black Health Matters sat down with one of the campaign’s ambassadors, Pro Football Hall of Fame member and prostate cancer survivor Michael Haynes (he played for the New England Patriots and the Los Angeles Raiders), to talk about the importance of prostate health.

Black Health Matters: Michael, you were diagnosed at a prostate cancer event at the Pro Football Hall of Fame. Were you having symptoms that led you to get tested? If so, what were they?Â

Michael Haynes: I was screened just because the event was happening. I worked at the NFL at the time and had had a physical earlier in the year, so I didn’t have a reason at all to get screened. My boss suggested that I participate to encourage some of the other guys to get screened.

What did you know about prostate cancer before your screening?

MH: I’d never even heard of prostate cancer. I didn’t know what the prostate did. The doctor really scared me. He said one in five African American men would be diagnosed with prostate cancer in their lifetime. The numbers shocked me because nobody’s talking about it. I asked the doctor about women and breast cancer, and he said one in eight women will be diagnosed with breast cancer.