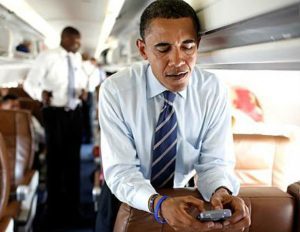 The rumors have been flying fast and furiously: Post-presidency, President Obama may head to Silicon Valley as a venture capitalist (VC).

He set the rumors abuzz after an interview with Bloomberg,Â “The conversations I have with Silicon Valley and with venture capital pulls together my interests in science and organization in a way I find really satisfying.â€

ObamaÂ Has the Proven Skill Set

The PresidentÂ has demonstrated the chops needed to be an incredible tech VC. As Tim Mullaney writes for Market Watch, Obama “boosted America’s economy in the short-term, while planting seeds that will invigorate it for decades.â€

Obama’s presidential legacy will be one that future historians may view as a 21st century Age of Enlightenment, as it includes a federal push for science and technology arguably not seen since JFK pushed for space exploration.Â The Obama Administration launched a myriad of technology related programs and efforts in his first term such as Digital Promise; the National Robotics Initiative; expanded broadband access through the Recovery Act, and placed the power of online petitioning the White House into the hands of the people with We the People.Â His second term saw efforts such as TechHire, a federal program to prepare more Americans for high-tech jobs in the 21st century. Obama also urged the FCC to take a tough stance on net neutrality; that is, keeping the Internet open and not subject to the greed of data carriers and telcos.

A Boon for Tech Diversity

And, perhaps of most consequence, Obama would be a high-powered, highly visible man of color in the VC field, which desperately needs diversity.Â Minority founders have more trouble acquiring startup capital. Statistics showÂ that VCs are more likely to invest in companies with founders more like them–predominately white and male.

“Early funding is often the most difficult for people with less access to influence and money—particularly people of color and women,â€ said Aaron Walker, the founder of Camelback Ventures.

Samara Lynn has covered the technology space as a journalist for almost a decade and previously worked in the IT field. Follow her on Twitter: @samaralynn