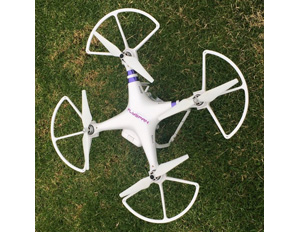 Drones are not just a hobbyist’s pastime but are used increasingly for security (think bomb-diffusing drones); in agriculture; and in myriad ways. It’s a good time to get into drones and Brock Christoval, CEO and co-founder of Flyspan, has done just that.

Christoval, an engineer withÂ a Bachelor of Science in Aerospace Science Engineering from Tuskegee University, launched the company in 2013 along with another engineer, Vinny Capobianco.

Flyspan connects the power of drones to commercial industries. The company also makes a software platform enabling users to make decisions using real-time information from their drone fleet. In a nutshell, this is an intelligent drone fleet management solution.

In an interview with Drones X, Christoval said, “The company was founded on the realization that when organizations want to bring drone technology to their businesses, they will need a solutions provider with superior technical expertise in engineering things, from problem to solution.â€

He also sits on a drone advisory board for the FAA. He worked on an effort to come up with a minimal operations procedure that would satisfy both the drone industry and the FAA’s regulations, according to an article by The Drone Girl.

Christoval was also invited by California Gov. Jerry Brown to speak on a panel about the potentials for the commercial drone industry for the state, as per Drones X.

At the panel, he encouraged building a “drone highway of the future.â€ Gov. Brown’s office used papers published by Flyspan to study the potential of drone use.

Christoval is regularly featured as a presenter and panelist at various industry events, discussing the current challenges of drones and the roadmap for the technology.

He said at one event, “One of the biggest obstacles in the drone industry is that we need vehicles that can fly for over one hour. Battery life is a major challenge.â€

Flyspan will provide exciting demonstrations of its cutting-edge drone technology at Black Enterprise’s TechConneXt Summit in the Innovation Lab.