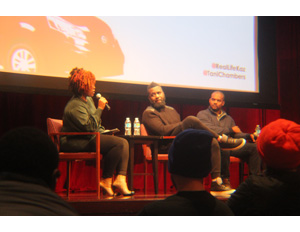 A largely millennial-aged audience sat, enraptured, as tech entrepreneurs close to their ages or a scant few years older, offered advice on navigating to success in the digital age, in discussion panels interspersed with the fiercest beats from hip-hop.

Monday’s event featured some of the most well-known, and youngest, movers and shakers of color in the tech industry.

Conservatively-named panels such as “How to Become a Content Marketing Expert” contrasted with the young, on fleek panelists and moderators who led the discussions. The panels were comprised of those who found a way to gain fame and fortune (or are on a rapid trajectory toward both) via digital content: blogging, creating websites, and successfully manipulating social media; or through creating tech startups.

On the aforementioned panel was Alexandra Wolf, founder and CEO of the audaciously named BossBabe.com–a site that boasts of being a place to “netwerk” for young, female bosses.

“No Rules”
On her thoughts about creating compelling digital content, Wolf said, “The rules are there are no rules.” She likened the current digital content culture to the Industrial Revolution, citing the lack of regulation and declaring anything online as, “It’s fair game right now.”

Moderating the panel was Aubrey Flynn, who is the vice president of all things digital for Sean “Puff Daddy, Puffy, Diddy, and P. Diddy” Combs. Flynn spoke of the need to constantly re-invent when it comes to digital content and of the importance of high energy. “The tired get fired,” he joked (sort of), at one point. He also told the audience about his boss’ work ethics.

“One day it’s ‘you did a great job,’ the next day we had to push it more,” said Flynn. He described Combs as someone who is “always pushing for innovation.”

How to Succeed in 30 Days
At “The Digital Media Starter Kit” panel, Kazeem Famuyide, founder and CEO of thestashed.com spoke about launching his site, TheStashed.com, in 30 days. He offered his advice for creating well-received online content in four points: Making sure you are a trustworthy name on the content matter; put together an amazing team; create great content (not limited to text–include video, interviews, editorials…); and trust your gut.

Famuyide also urged the audience to adopt a think-outside-the-box approach to content creation. “We were at an NBA rookie photo shoot. All of these sports writers were asking the same questions, ‘How does it feel to be drafted…?'” said Famuyide. “So we asked the rookies to sing a song.” That video he said generated some of his site’s biggest content to date.

Veteran Advice
One of the most captivating speakers was Tristan Walker; a Silicon Valley heavyweight, the founder of Walker & Company Brands (which recently received $24 million in funding, and a business veteran at age 31–at least when compared with the young audience.

Walker shared his life story which included working at Twitter in its early days, his work at Foursquare, and how he ventured into the entrepreneurial world with a career stint at Andreessen Horowitz.

He advised the audience when dealing with founders and in business, in general, to “show conviction and authenticity.” He attributed his success to a “fundamental belief that all global culture is led by American culture which is led by black culture,” an idea which the audience enthusiastically supported.

The event also featured other fascinating panel discussions as well as live music from Zeemuffin (a renowned DJ) and Divine the 4th Letter, a rapper, entrepreneur, and self-described “motivator.”