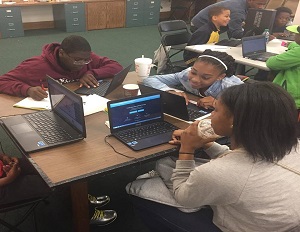 (Image: Courtesy of Get IN Chicago)

This weekend’s news about yet more violence in Chicago was disheartening, to say the least. Yet, there is more going on in Chi-town than gang violence. You may not think of coding skills as a building block of violence prevention, but thanks to the promising work of Get IN Chicago and Smart Chicago, that’s exactly what they may be.

Get IN Chicago, a three-year-old private fund supporting evidence-based programs that work to reduce youth violence, organized the Youth-Led Tech summer program in five of The Windy City’s most underserved communities, in partnership withÂ Smart Chicago, aÂ tech collaborative. The program just completed its second year of providing Web design, graphic design, and app development training to classes of young people ages 12—18. The participants are at high risk of being a victim or perpetrator of violence.

“This is not just a happy-go-lucky program,â€ says Toni Irving, Ph.D. and Executive Director of Get IN Chicago. “It’s a much more difficult population to recruit, retain, and engage.â€

Yet, this is their target demographic, Irving told me. “Experience in a program can motivate a young person to think differently about themselves and their future, which then compels them to be more actively engaged in their outcomes,â€ she says.

Students earned the Microsoft laptops they used in class if they completed their assignments and attended 80% of the classes. Along with learning tech, students learned about writing rÃ©sumÃ©s and cover letters, emailing, public speaking, posture, and other job-readiness skills.

“They also learned that you don’t have to wait until you’re older to develop a website and sell, say, T-shirts they’ve designed,â€ says Maria Calderone, one of the tech teachers. Calderone also noted that tech skillsÂ weren’t a prerequisite to participate. Kids didn’t even have to be students; “Dropouts are OK,â€ she says.

One of the participants, a rising high school junior named Jaree Clark, described the program as “a good experience.â€

“I learned about game design and also WordPress,â€ he says. “I didn’t have any tech or computer coding experience before, but I wanted to design my own game systems.â€

Now Jaree is thinking about working in game design and eventually owning his own business. His more immediate plans include returning to the program next summer.

For more information about Get IN Chicago, go to its website.