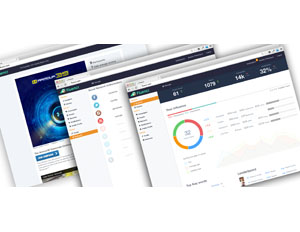 “Your network is your net worth.â€ It’s probably one of the most popular phrases of the social media era. The concept, which spread like wildfire, and is even the title of a book by marketing expert Porter Gale, has over the years manifested into a number of Internet platforms like TweetReach, Klout, and other analytic tools that measure the potency of social media activity.

But not one of those tools has the potential to help everyday people monetize their social influence, like Fluencr, a user-facing, discovery-based platform that uses a point solution model to track, measure and reward action-based, brand-specific social influence across multiple social platforms.

“We created a unique marketplace that gives individuals the same access to their favorite brands and initiatives that athletes and celebrities have,â€ says Gerome Sapp, 32, founder and CEO of Fluencr. “We give individuals the ability to now connect with their favorite brands as social ambassadors, prove how socially influential they are to that brand, then get real recognition and rewards from that brand for their brand specific social influence.â€

As a former NFL athlete that played three years for the Baltimore Ravens, and two years for the Indianapolis Colts, Sapp was always inundated with endorsement deals from various brands.

“Brands…knew that the NFL gave me a platform that allowed me to amplify my influence,â€ says Sapp, who graduated from the University of Notre Dame with a degree in finance, and also completed an executive education program at Harvard Business School while playing in the NFL. “I knew that the ‘average person’ who isn’t known to the world but often has influence within their social circles could prove to be influential to a brand or initiative if given the opportunity.â€

So, when Sapp launched the company with cofounders Benjamin Floyd, Benjamin Falk and Brad Potterbaum in March 2013 at SXSW, he first targeted a wide array of non-celebrities who had a niche following such as fashionistas, crossfit enthusiasts and sneaker heads (those who collect, trades or admires sneakers as a form of hobby).

In addition to the average person, brands, leagues, charities and political campaigns can now also invite existing ambassadors (i.e. professional athletes, celebrities, brand employees, etc.) into their campaign to be the voice and face of their campaign initiatives.

As such, this metrics-based tool provides brands, such as Fluencr’s newest client Under Armour, the ability to verify and validate the social return on investment (ROI) their existing compensated ambassadors generate for their social media marketing initiatives.

It also gives those same compensated ambassadors the ability to leverage their metrics-based influence score when negotiating their present and future value, says Sapp, who saved money from his NFL days to start Fluencr.com.

Fluencr is nationwide, but is currently in a private/invite-only stage right now, which means that brands have to invite individuals into a campaign. Fluencr will open the platform up for users to see and join their favorite brands campaign in about a month and a half.

Black Enterprise salutes Fluencr as Tech Startup of the Week for finding a tech-driven way to democratize the role of brand ambassador.