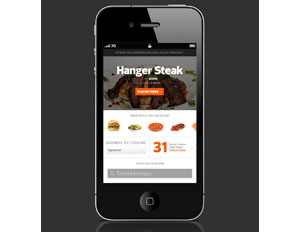 No Chains helps customers find the best non-franchise restuarants that they never heard of. Founder Rich Winley got the idea while trying to find local food in Australia.

If you’re not a fan of behemoth-sized franchises that serve the same frozen prepared foods with different garnishes regardless of whether you’re dining in San Francisco or Maine, then food app No Chains is right up your alley.

Launched in 2013, No Chains helps travelers and foodies find the best non-franchise restaurants that they’ve never heard of. Founder Rich Winley, 30, got the idea for No Chains in 2011 while traveling in Australia. An adventurer at heart, Winley wanted to find out where the locals went to eat and discover some of the best dishes in town.

“Google…. couldn’t help me, so I found places the old fashion way of asking locals,â€ said Winley, who once owned Fix The Glue, an Internet marketing firm targeting small businesses and nonprofits. “I thought to myself,how many people are running around looking for local places with great local food… I’ve used other popular apps to search for a good burger in the middle of Manhattan and several of them suggested a McDonald’s nearby.â€

When he returned to the states he developed a hunger to create a mobile app that would satiate the problem. Instead of making reviews by the venue, Winley wanted to create an app where everything is reviewed by the menu. With assistance from Clemson University’s Human-Centered Computing division, No Chains qualified to compete as one of 11 participants in The Iron Yard, a Greenville-based, 13 week tech accelerator associated with Startup America Partnership’s Global Accelerator Network.

Winley completed The Iron Yard, raised a small amount of money from angel investors and launched a public beta for No Chains in Greenville, South Carolina this past January, and he launched again in Austin, Texas during SXSW in March.

Black Enterprise recognizes No Chains as Tech Startup of the Week as the company prepares to launch the brand in New York City next week.

To achieve this he moved to New York for 30 days, teaming up with Meetup groups and communities of food and drink enthusiasts like Dipsology that have active and ongoing relationships in local restaurants. He also worked with The New York Restaurant Association, among other organizations, to create strategic partnerships that would assist in adding more restaurants to the app’s growing database. As a result, there are now 5,000 more restaurants and 1 million new menu items in the No Chains app, says Winley.