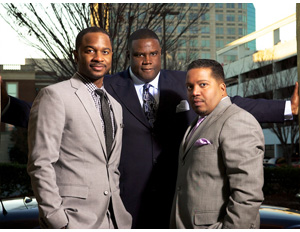 Who does that? Who fails a computer science class in college only to turn around and build a million dollar tech company? I mean really, who recruits more than 100 clients within the company’s first two years when competitors 10 years their senior barely have 20. Really? Who trounces the competition by using software as a service (years before it became a solid business tactic) by charging thousands of dollars less than their peers? OnceLogix that’s who.

The Winston-Salem, NC-based company provides custom, enterprise-level, web-based applications with a particular emphasis on building white-label solutions for the healthcare industry…right now. In the future, the company plans to expand their portfolio of B2B managed services software for the entertainment, sports, music, and meetings and conventions industries to name a few. Their breakout product, Sharenote, provides HIPPA-compliant security to simplify client care for behavioral health organizations. It fosters communication between doctors, uses pin numbers to add signatures to documentation in bulk, and helps create audit trails that could have never been done on paper.

The team, which consists of Trinity Manning, Rod Brown, and Tyrone McLaughlin was assembled by their pastor when Manning, a web designer and software developer, was offered $3 million for a web-based application he built in his spare time. The pastor held a meeting with some of the congregations top business men and women and asked them to help Manning decide if he should sell the product or start a business. In 2004, Manning, who despite earning a less than passing computer science grade at Wake Forest University, stumbled upon the idea to help a group home manage the notes that clinicians had to keep on patients.

“In the group home they had to keep standard notes that they had to write on their clients. They had to do it every day, three times of day,â€ says Manning. “All of that paper was stacking up. People had to review, sign it, and make sure it was correct. The system helps them have access to that information pretty quickly.â€

Already golf buddies with Manning, Brown, a 17-year veteran at Wachovia Securities, was the only one to follow up after the meeting designed to help Manning build a sustainable business and not just a part time hustle. Brown asked McLaughlin, a financial advisor with American Express Financial Advisors, to join the team.

Now, Sharenote is being used by some 200 practices; some that have 400 plus patients where doctors and administrators need to keep track of patient routines along with standard information like demographics, race, age, sex, and the zip codes of the communities that they serve.