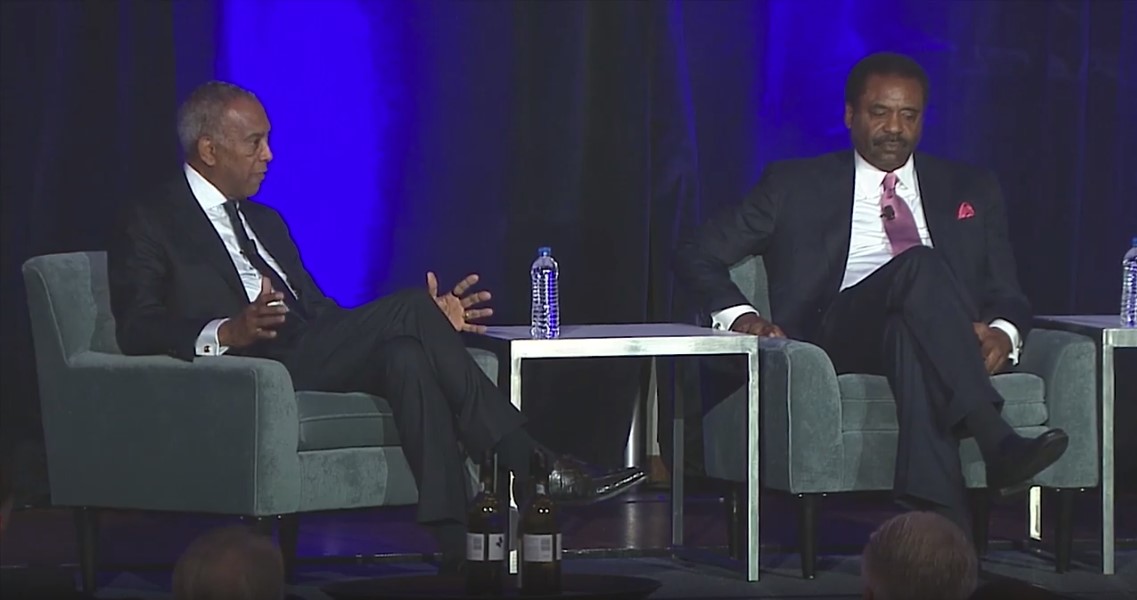 Hundreds recently gathered at the annual NPower Gala in New York City to recognize two tech titans who have helped power the transformation of the industry over the past two decades: David Steward, chairman of the Maryland Heights, Missouri-based information technology giant World Wide Technology Inc. (No. 1 on the BE Top 100 list with $11.3 billion in revenues) and John Thompson, the 40-year tech veteran who serves as chairman of Microsoft Corp.

During the fundraiser for the Brooklyn-based nonprofit that provides no-cost training for veterans and youth to launch digital careers, the event also served as the venue for an exclusive fireside chat in which Thompson and Steward discussed, among other topics, how diversity can save the American tech industry.

In the session, moderated by NBC’s Weekend Today co-host Sheinelle Jones, the two told the audience that diverse engineers and computer scientists were needed to address the industry’s talent shortage. Thompson maintains that the future global competitiveness of American companies depends on whether they “open the aperture on diversity,” given that the U.S. produces only 50,000 to 80,000 tech professionals annually versus about 1 million for China.

Since by 2040, minorities will be the majority, Steward adds that for every company, “it is a business imperative” and the ability to attract and keep such talent will prove “pivotal” for innovation and growth at WWT and other such firms over the next 20 years. In fact, WWT has forged a long-term partnership with NPower to facilitate the flow of proficient, idea-rich tech professionals.

The two also focused on the state of women of color within the sector. Thompson, a venture partner for Lightspeed Venture Partners, a Silicon Valley firm that invests in early-stage enterprise technology and consumer products companies, says he’s had more black female founders reach out to him than ever before. However, they face the same nagging problem in trying to grow their enterprises: capital. ProjectDiane, named for 1960s civil rights leader Diane Nash, found that a mere 34 startups led by black women had raised more than $1 million in financing, according to a USA Today article published earlier this year.

BLACK ENTERPRISE has long covered the evolution of tech titans Steward and Thompson into industrial forces. WWT has demonstrated phenomenal growth since Steward founded it in 1990. By the time the company was named the BE Industrial/Service Company of the Year in 1999, revenues had grown to an impressive $201 million. Within four years, the faith-based entrepreneur had developed business-building alliances with powerhouses such as Cisco Systems, Dell, and HP. WWT took off like a rocket, becoming in 2003 the third black-owned business to surpass the billion-dollar revenue mark. If it were a public company today, WWT, with more than 5,300 employees, would rank No. 278 on the Fortune 500.

Thompson, on the other hand, had a meteoric rise in corporate America. In his 28-year career at IBM, he made the ascension from sales rep to general manger of IBM Americas, overseeing a $37 billion business unit. In 1999, he was appointed CEO of Symantec and proved so successful in his role that BE named him the 2004 Corporate Executive of the Year under the fitting banner: “The Best CEO in Silicon Valley.”  When he retired from the company in 2009, NetworkWorld reported that his 10-year leadership was marked by taking “the firm beyond its base strength as a consumer-focused antivirus company through a broader enterprise-security strategy that entailed aggressively acquiring storage, management and security firms to expand Symantec’s portfolio and customer base.” By 2014, he was appointed chairman of Microsoft, succeeding founder Bill Gates after two years as a corporate director. In that role, he oversaw the search that led to the selection of Satya Nadella as CEO as well as the company’s shift to the cloud. His bold, impactful  leadership and groundbreaking track record within the industry earned Thompson the Trailblazer Award at BE’s 2017 TechConneXt Summit.