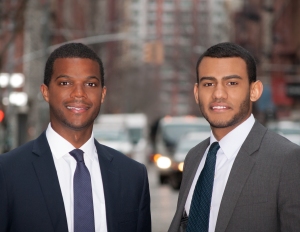 Launching their startup in July 2014, the platform is now operating through Jopwell.com, a website already used by some high-profile corporate partners with a commitment to hiring more minorities. Those companies include Facebook, McKinsey & Co., Morgan Stanley, Abercrombie & Fitch, and MasterCard.

Braswell, co-founder and CEO, says the two started the venture because there was a significant gap in connecting talented minorities with companies focused on creating diverse workforces. The platform allows job seekers and HR personnel to engage, providing a niche to help companies overcome minority recruitment challenges such as inadequate marketing, a limited pipeline, and a lack of resources by providing technology that directly addresses those key barriers. “Jopwell was born out of our desire to fill a void that we were both intimately familiar with through a technological solution that did not previously exist,â€ says Williams.

Before launching Jopwell, Braswell, 27, and Williams, 25, were on the foreign exchange sales team at Goldman Sachs for three and two years, respectively. Their combined multiple summer internships in the financial services sector and elsewhere helped them learn about diversity and minority initiatives throughout various industries. “Additionally, we’ve been fortunate enough to cultivate an incredible network of mentors, advisers, and investors with an outstanding amount of business and technology savvy,â€ Braswell says.

After teaming with an impressive list of companies, Braswell and Williams were contacted by angel investors. The duo was successful in raising more than $500,000 within a month to start the venture, using the funds to grow from two to six employees and to continue developing the platform. “Our investors intimately know and understand the difficulties associated with minority recruitment, and they believe Jopwell can disrupt how companies target candidates of color,â€ Braswell says.

The partners are now in the process of raising a seed round of more than $1 million to continue growing their team and developing the platform. “It is critical to Jopwell’s success that we bring on strategic investors who will truly add value to our business as we enter this crucial stage of growth,â€ Braswell says.

Based in New York City, Jopwell enables companies to access its proprietary technology to tap into its pipeline of minority candidates and search for them based on their backgrounds, interests, and skills. Those firms, in turn, can contact candidates directly to continue the recruiting process.

For job seekers, candidates can create profiles beyond just a rÃ©sumÃ© –allowing them to tell their stories and differentiate themselves from the pack. Through the website, job hunters can also learn about various industries and companies as well as a given corporation’s specific diversity initiatives.

So how does Jopwell make money? It charges companies annual service fees while job seekers can join for free. Its growth strategy includes selective outreach to potential partner companies to add new business. Williams, co-founder and president, says the platform allows minority candidates from a range of experience levels to join the network as long as they have an undergraduate degree or are enrolled in college. “We want Jopwell to be the go-to professional platform for minorities, whether you’re a college freshman or a senior manager with 20 years of experience.â€

Porter Braswell will be a speaker at the panel “Disruptors and Innovators: Finding the Secret Sauce to Elevate Your Business” at the Black Enterprise Entrepreneurs Summit hosted by Nationwide, May 13—16, 2015 at the Hyatt Regency Atlanta. Expect innovative sessions, high-powered speakers, and an early peek at the products, trends, and services you’ll need to stay ahead of the curve.Â  To register and find out more, visit www.blackenterprise.com/es/. Join us at the Entrepreneurs Summit, Where Innovation and Capital Meet.