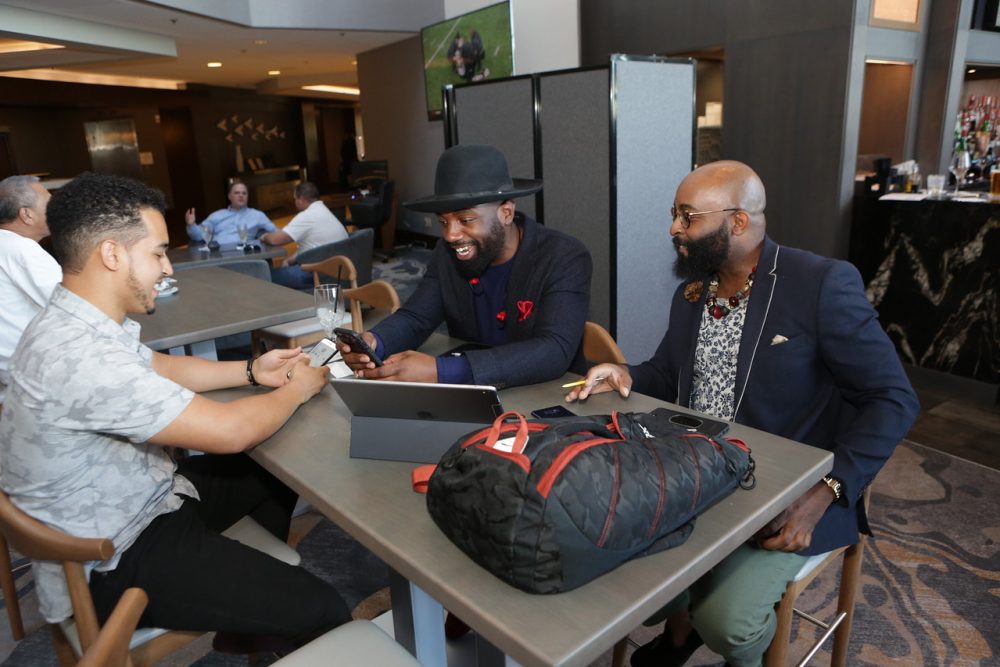 It’s fair to say that there is no way around technology. No matter what you do professionally or how much of a techie you don’t consider yourself to be, tech is a part of pretty much everything that we do. And, it’s disrupting every industry. That’s why this year at TechConneXt (TCX) we switched up the game and navigated away from the traditional ways of producing a tech conference.

And trust, we know that the fall is filled with dope tech conferences all over the country with a heavy focus in the Bay Area. But please believe, when we tell you that TCX was the place to be.

For two days, black and brown tech innovators, entrepreneurs, and enthusiasts gathered at the San Francisco Marriott Waterfront Hotel in Burlingame, California, for access to resources, capital, and the latest advances in tech. And most importantly, they got to network with others who are making their mark in the tech space in corporate America and as entrepreneurs. 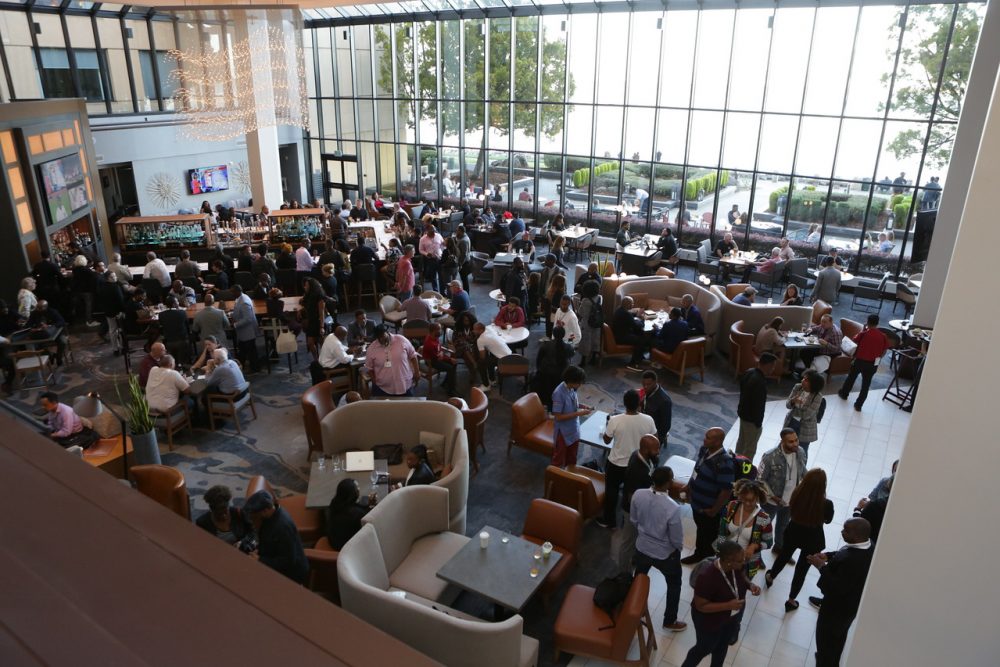 An all-star lineup of speakers included Angela Yee, co-host of The Breakfast Club and creator of Lip Service Podcast; Nancy Douyon, International Research Lead at Uber, Phillip Agnew, co-founder and former co-Director of The Dream Defenders; Amber Grimes, head of Artist & Label Marketing at Spotify and owner of Cardi Brand Agency; and so many other movers and shakers!

We also invited 64 students from 16 historically black colleges and universities to the 4th Annual BE Smart Hackathon, presented by American Airlines. Over the course of 36 hours, the students worked on a special project that was created by American Airlines. Out of the 16 teams and much deliberation, the top 8 teams were selected to present their projects in front of our judges. And then there were three schools and then there was one. The winner of the hackathon was the team from Xavier University in Louisiana. 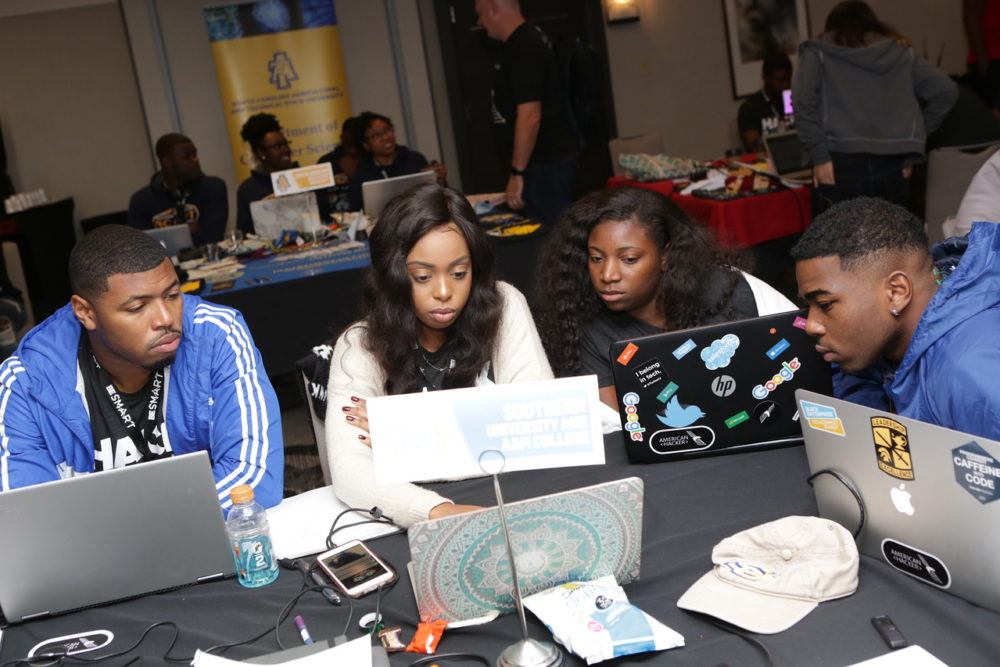 We were also super excited to host our first-ever Black Tech Awards on Monday presented by Dell! We honored the best to ever do it in technology:

Morgan DeBaun, Founder & CEO of Blavity as Founder of the Year.

Christopher Gray, Founder & CEO Scholly Inc. as the Breakout Start of the Year.

Rashaun Williams, General Partner at Manhattan Venture Partners as Investor of the Year. 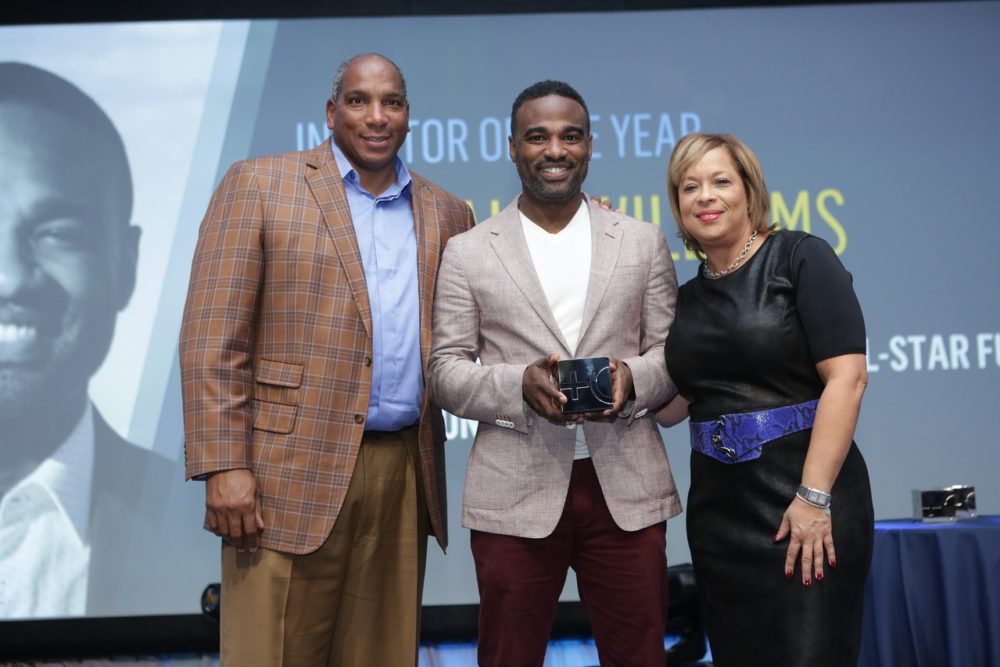 Richard “Prince Ea” Williams, Filmmaker and Owner of Make Smart Cool L.L.C. as the Social Influencer of the Year. 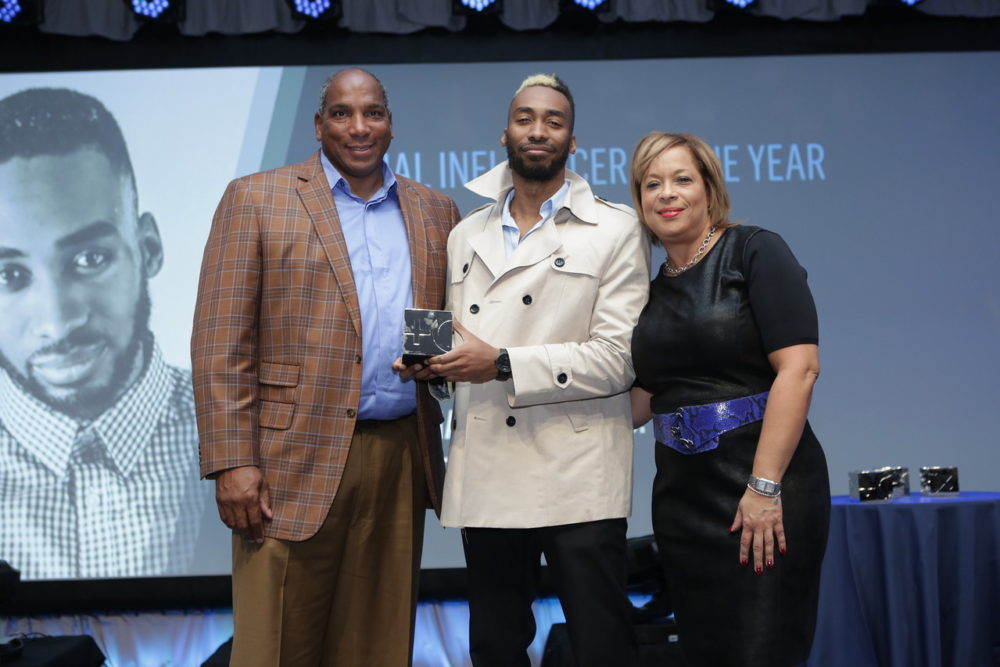 Finally, we had the TCX Pitch Competition presented by Prudential. The stakes were high as techpreneurs took to the stage for their chance to win $10,000! While everyone gave their all, Pedro Moore, the founder of Funding Fuel, took home the check.

And did we mention that we launched our TCX Fellows program?! That’s right, we had over 150 professionals and entrepreneurs from all over the country who will have exclusive access to private sessions with venture capitalists and networking meetups.

You can check out the two-day recaps and image galleries below:

Black Enterprise president and CEO Earl “Butch” Graves Jr. and entertainment journalist Gia Peppers kicked the two-day event off. Graves deemed the event a place where “black startups, founders, and innovators can gather to gain real access in the technology industry.” He recognized the tech’s fourth year of existence with the phrase “TechConneXt 4.0.”

In the kick-off session, Armand Carr, known in the Bay Area as the host of radio’s “The Quiet Storm’ sat down with Phil Agnew, the co-director of Dream Defenders to talk about amplifying your business or organization through podcasting. Dream Defenders, an organization dedicated to the eradication of police and state brutality, uses podcasts and social media to spread its message, raise awareness, and foster activism. While an advocate for podcasting and social media, Agnew cautioned that such technologies are only “a supplement” and do not replace the effectiveness of human-to-human interaction.

Angela Yee, host of the nationally-syndicated radio show The Breakfast Club, and creator of Lip Service Podcast, moderated a session featuring other dynamic women who are using social media to build their brands, enact change, and become models of women empowerment. Amber Grimes, who heads up artist & label marketing at Spotify and is the creator of the Cardi Brand Agency; along with Aliya Janell Young, a professional dancer and founder of Queens N’ Lettos, joined Yee for the “DigiFemme” panel.

The women spoke about using social media to showcase your passions. People tend to find success on social media when “things grow organically. When people try to make things ‘go viral’” they usually fail, advised Yee. All three spoke about the importance of “finding your lane” when building your social media network.

One of the most discussed topics when it comes to being black and brown in tech—is diversity. Yet, is there a feeling of diversity fatigue? That interesting subject was brought up in a panel that was hosted by Intel featuring Damien-Hooper Campbell, chief diversity officer at eBay; Ed Zabasajja, director, office of data analytics and retention, Intel; and moderated by Jotaka Eaddy, vice president of policy, strategic engagement and impact at LendUp.

Hooper-Campbell said that the goal to truly diversify tech is a long game. He says while we need to continue the pursuit of diversity with “a sense of urgency” he advised that diversity happens in years, not overnight. He further said that diversity progress should be measured with more than numbers.

Zabasajja also spoke about the enormous purchasing power of people of color—currently at about $1.2 trillion and growing—and how that is a form of power that will help move the needle on diversity in tech.

With black purchasing power, he said, “don’t expect people to be static.”

“Over time, [diversity] will be a see-saw, but it will trend upwards to those with decision-making, purchasing power,” he said.

Akon, yes that Akon, showed his mettle not only as an entertainer but as an entrepreneur and futurist in a keynote address. He shared with the audience his vision for his new cryptocurrency, Akoin, and how he sees it re-shaping Africa and the African diaspora.

In his keynote, he said that the Akoin, which stands for ‘Africa coin’ will create entrepreneurship and value all from this cryptocurrency platform. Akoin is poised to be used for more than financial transactions—it can be used for land purchases, an equitable voting system, and much more. Akon will also be featured in the upcoming issue of Black Enterprise magazine, which covers the Akoin platform in depth.

TCX’s ebullient host, Gia Peppers got Day 2 rocking by asking the audience to testify. “What do you like most about TCX?” she asked. The consensus: the conference brought the community together to eliminate barriers in the tech space.

Douyon, who has worked at some of the most prestigious tech companies including Intel and Google, spoke about how she helps tech companies customize their products for global markets, particularly for countries where people of color are the majority.

“White America is not the majority of the world, ” she said during the ‘What’s Poppin’ Overseas?” discussion. “When you shift the design process to people who are underrepresented, you build better products.”

Other Day 2 panels including a session on eSports with Delane Parnell, an eSports entrepreneur who hails from the Detroit projects and just raised $15 million for his startup. Parnell was interviewed by former pro athlete, now entrepreneur Cameron Colvin. The “Rise of the Machines” session featured artificial intelligence (AI) experts and innovators including Gloria Boyland, corporate vice president, Operations — Service Support, FedEx; Debo Olaosebikan, founder and CTO, Gigster; and Kareem Yusuf, General Manager, Watson IoT, IBM. The discussion centered on AI displacing jobs, how smart computers can really become, and how people of color of all ages can prepare for the AI-automated workforce.