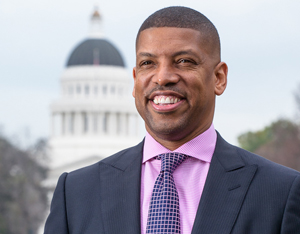 Agriculture and the Gold Rush were Sacramento 1.0 and California’s political hub led the city’s 2.0 iteration. But 3.0 is all about technology driving economic growth, according to Sacramento Mayor Kevin Johnson. During the TechConneXt Summit in Silicon Valley at the Hyatt Regency in Santa Clara in a fireside chat Johnson shared his views on how 3.0 cities are building “nextâ€ economies as hubs on innovation and entrepreneurship.

Johnson spent 12 years playing pro-ball where he was a three-time NBA All-Star along with holding numerous records for the Phoenix Suns organization. Today he is highly noted for his work in public service and being the first African American to serve in that office. It was his grandparents he said who taught him the importance of “giving back.” It was Barack Obama’s first presidential election run (and win) that inspired him to run for mayor. He also served as president of the U.S. Conference of Mayors.

Since entering office in 2008, Mayor Johnson has been on a mission to reshape the city of Sacramento by creating jobs and economic development, launching sustainability initiatives, improving public safety, and enhancing the local quality of life.

As he sees it, the second generation of cities, or Cities 2.0, came much later during the Industrial Revolution. These cities had factories and big industry smoke stacks. They had electricity, transportation, and other modern services. They were destination points for immigrants from around the world pursuing the American Dream. “Our 3.0 cities are paperless, they’re wireless and they’re cashless,â€ said Johnson. “There are more cell phones than landlines, more tablets than desktops, and more smart devices than toothbrushes.

Johnson has often cited ridesharing companies such as Uber and Lyft as models of urban innovation and next economy technology. Until Uber came along, people still were hailing cabs the way they did a century ago–standing on a street corner waving their hand. Now, a person picks up a smartphone and a car arrives within minutes. This is what his “Cities 3.0” vision is all about.

Johnson believes that 3.0 Cities must provide a new kind of infrastructure, like citywide Wi-Fi networks and turnkey operations for startup companies, from office space to high speed communication lines. The bottom line is cities must provide services and infrastructure that residents and businesses need and do it quicker, faster, and cheaper

If cities are going to drive the revitalization of this nation then they must become the laboratories and incubators of change. They must be the engines driving the local and national economy. “What’s more, we need more African Americans in technology and we need to create wealth through entrepreneurship,” added Johnson.