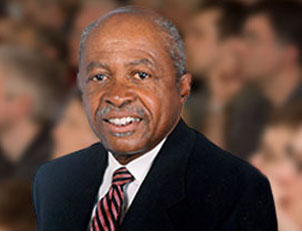 Sponsored by AT&T, Capital One, EMC, and Intel, the dinner acknowledged Clay’s resilience and commitment to paving the way for other African Americans. In the 1950s, Clay was politely told by a company that it had no “jobs for professional Negroes.â€ Yet, within a year Clay would indeed work for McDonnell Aircraft and begin a lifelong commitment not only to his own professional excellence, but to bringing other African Americans on board.

Emceed by the stunning Caroline Clarke and attended by about 400 people, the dinner also included an acknowledgement of the 35 students in attendance, particularly the 20 student hackers, all from historically black colleges: Hampton, Howard, Johnson C. Smith, Morgan State, Southern, and Spelman. Black Enterprise CEO Earl “Butchâ€ Graves said that the students’ presence was his response to Silicon Valley companies saying that they can’t find black talent: “You couldn’t find them, so I found them for you,â€ he said. He also reported that significant changes are occurring: Hewlett-Packard has four black directors on its board; and Apple named James Bell to its board just last week.

Graves quoted his father, Black Enterprise Founder and former CEO Earl Graves Sr.: “Our greatest history is ahead of us,â€ and intimated that the future for African Americans in Silicon Valley is bright indeed because of people like Clay and the Colemans who paved the way, and the 35 students in attendance who have embraced science, technology, engineering, and math–just a small sampling of the thousands of black students across the country who have done so.

Rosalind Hudnell, chief diversity officer and global director of Education and External Relations forÂ IntelÂ Corp., one of the title sponsors of the TechConneXt Summit, greeted those in attendance and applauded Black Enterprise’s planting of its flag in Silicon Valley. “It’s about time,â€ she said, to cheers and applause.

Grace Spellman-Castro, vice president of multimedia sales at Black Enterprise, thanked and acknowledged the sponsors: presenting sponsor AT&T; Intel and its audacious $300 million investment to increase diversity in tech; Capital One, sponsor of the BE Smart Hackathon; and corporate partner EMC.

But the highlight of the evening was, of course, hearing about the sterling character and trailblazing work of Roy Clay Sr. and Ken and Caretha Coleman.

Roy Clay Sr.
The 86-year-old Clay, founder and CEO of Rod-L Electronics and a former manager of computer research and development at Hewlett-Packard, forged an extraordinary career, especially in light of the prevailing racial attitudes of the time. He came to Palo Alto, California, in 1961 and worked for Control Data before moving on to HP. The first black tech founder in Silicon Valley, he was inducted into the Silicon Valley Engineering Hall of Fame. Coleman, a direct beneficiary of Clay’s commitment to pave the way for other African Americans, said of Clay, “He’s viewed as an icon by all of us.â€

Now somewhat frail, Clay still displayed a sense of humor when he described his current practice of meeting with African American colleagues once a month. He related how, in deciding what to call the group, Coleman, a member, suggested OBG’s–for Old Black Guys.

He also described how he wanted more African Americans in Silicon Valley, and how he was part of efforts to open a YMCA in East Palo Alto. At 86, Clay said a driving force in his life is to improve the quality of life of those around him. He also stressed the importance of education for African Americans.