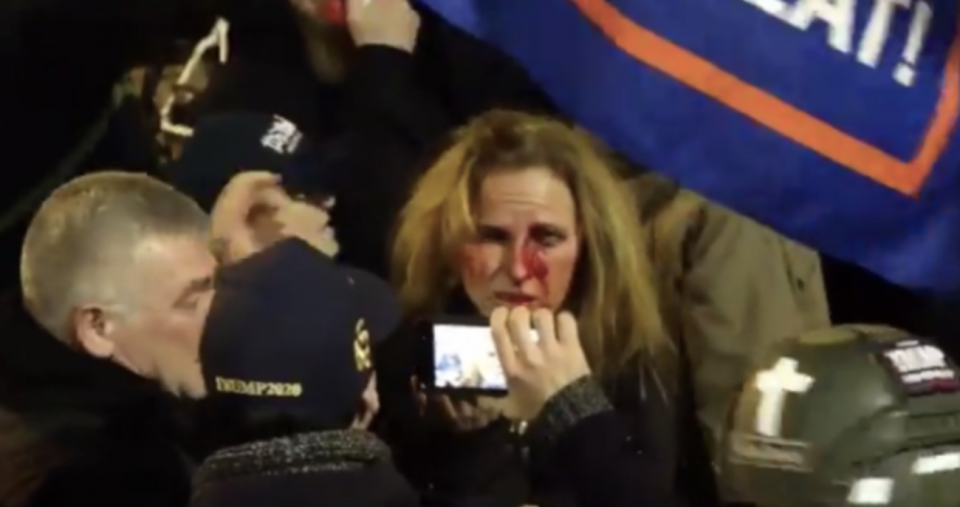 A Massachusetts teen took to social media to publicly shame her mother after discovering the woman attended the Wednesday riot involving Trump supporters at the Capitol. Trump-supporting insurgents stormed the historical building to interrupt the Senate’s validation of President-elect Joe Biden’s win, as BE previously reported.

According to the New York Post, Helena Duke, 18, outed Therese Duke on Twitter when she retweeted a viral video of her mom bleeding from the face after being clocked by a female officer.

ON THE CODE SHE DID WHAT SHE HAD TO DO🤣🤣 MINK MINK
pic.twitter.com/mljLbZN4ym

Holy shit, you “this youd” your mother. 😭🤣@duke_helena you are a goddamn treasure. pic.twitter.com/nXjZsVYuAW

Duke posted the clip with a snarky caption.

“Hi mom, remember the time you told me I shouldn’t go to BLM protests bc they could get violent…this you,” she asked.

Helena informed the Post that the elder Duke was once a Democrat but switched her alliance to the Republican party after being “brainwashed” by the MAGA movement– one year after Donald Trump was elected.

A follow-up tweet showed Helena sharing a screenshot of another photo of her mom, sans the bloody nose, for the nonbelievers who doubted her.

“For those that don’t believe it’s my mother,” the caption read.

The now-private video detailed the events leading up to her mom’s bout with the officer’s hands.

The Post reported Therese violently attempted to snatch a cellphone from a Black female officer who was at the Capitol. The woman who was in uniform responded to the assault by jabbing the rioter in the face. As the group became more unruly, the unidentified officer was pushed into a crowd of officers. A fight ensued between cops and the insurgents, and pepper spray was used to subdue the mob.

Helena told the Post that she thought her mom was elsewhere taking care of a family member.

“She didn’t give me any more information about it, she was very vague … When I found out about the Capitol being stormed, I looked at her location sharing and it had been off for two days, so I assumed in that moment, I was like, ‘Oh my gosh, she might actually be there,’” the teen told the publication.
“And then the next day, my cousin shared a video of her getting punched in the face … by police after harassing them.”

This is the most legendary “this you?” I’ve ever seen pic.twitter.com/Ze43rlGmek

Holy shit, you “this youd” your mother. 😭🤣@duke_helena you are a goddamn treasure. pic.twitter.com/nXjZsVYuAW

👏This proves when you know right from wrong, even your OWN PARENTS can’t control your mindset! A REAL loyal person is gonna tell you when you’re wrong, not agree with everything you do. Racist people don’t usually have a motive except the fact that they were “raised that way”.

go off baby girl, your cyber mommas are so proud❤️ pic.twitter.com/Iml048fEiE

Here. I made this for you to commemorate the occasion. pic.twitter.com/otpaEJwndX

Newsweek also reported that Helena, a self-proclaimed lesbian, had been kicked out of her home previously because she supported the Black Lives Matter Movement. She also expressed that she had reservations about clowning her mother publicly.

“At first, I was kind of uneasy about it, but I think it was definitely so hypocritical of her to end up kicking me out of the house for going to peaceful protests because she assumed they’d be violent. And then end up going to this, which was obviously a very violent attack on the Capitol — and end up harassing a cop,” she explained.

The teen’s aunt and uncle were also in attendance. Noone knows the status of Therese’s face.