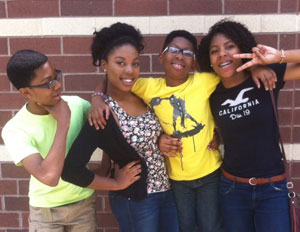 The Pinetart team is a group of siblings who wanted to make a difference with a tool everyone has: a smartphone. (Image credit: Facebook)

A family of young teens is doing its part to put a stop to police brutality through coding and accountability.

Caleb, Ima, and Asha Christian–14, 16, and 15 years old, respectively–have released an app that will help people stopped or abused by police officers document what happened quickly, easily, which could make officers more accountable for their actions.

According to Business Insider, the teens saw Michael Brown’s tragic shooting as an opportunity to help the community deal with police abuse.

“We’ve been hearing about the negative instances in the news, for instance most recently the Michael Brown case, and we always talk about these issues with our parents,” Ima Christian told Business Insider. “They always try to reinforce that we should focus on solutions. It’s important to talk about the issues, but they try to make us focus on finding solutions. That made us think why don’t we create an app to help us solve this problem.”

Five-O is an app for both iOS and Android that puts the power of police documentation in the hands of anyone with a smartphone.

The Christian siblings even founded their own company, Pinetart Inc., and already have two other apps under development called “Coily” and “Froshly.”

The Christian siblings are no strangers to programming. With parents from technology backgrounds, Caleb, Asha, and Ima participated in MIT’s k12 Scratch and App Inventor program. They’re also able to code in four different languages. “You’re never too young to learn, and you’re never too young to make a difference,” Caleb said.