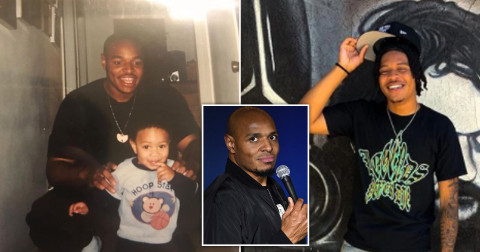 Comedian Tony Baker is mourning the loss of his 21-year-old son Cerain Baker who was one of three people who died in a car crash on Aug. 3.

Cerain, Jaiden Johnson, 20, and Natalee Moghaddam, 19, all died after their car was hit by two other vehicles that appeared to be involved in a street race, People reports. Now the 19-year-old driver reportedly responsible for the crash is facing multiple murder charges.

Hamlet Arseni Aghajanyan was arrested last Thursday and charged with three counts of murder and one count of reckless driving, a report from the Burbank Police Department said. A 17-year-old was also slapped with the same charges and is in a juvenile detention center pending a review of the case.

Aghajanyan appeared in court on Monday and pleaded not guilty to the charges, ABC7 reports. In addition to the three fatalities, a fourth person was also critically injured. Police say the victims were not involved in the street race that took place.

“This tragic and avoidable event was caused by subjects racing vehicles and driving recklessly at very high rates of speed,” police said.

On Monday, Tony Baker shared a series of tweets where he praised Cerain’s mother and shared how heartbroken she is over the loss of their child.

“People have been applauding me for my strength in these painful streets but the REAL MVP is Cerain’s mother,” Baker said. “We all know a Mother’s love is next level deep but she has been amazing moving through this nightmare.”

Aghajanyan’s attorney George Mgdesyan expressed how remorseful the teen feels about the crash.

“He feels very bad for what’s happened. Obviously, he himself, he’s recovering from his injuries. He was in the hospital for a couple weeks, had multiple surgeries,” Mgdesyan said. “My understanding is he needed to have another procedure, but now he’s inside, so we’re going to have to try to coordinate that while he’s in custody.”

Aghajanyan remains in police custody on $6 million bail while awaiting his next court appearance scheduled on Oct. 6.