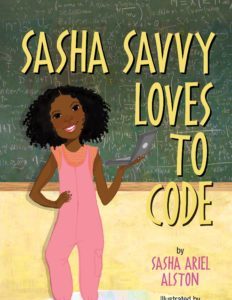 Rosa Parks once said, “Each person must live their life as a model for others.” When 19-year-old tech-savvy scholar and activist, Sasha Ariel Alston, considered how she could use her life, skill set, and knowledge to serve as a model for others to be inspired and courageous, she didn’t hesitate to move forward and put her confidence to the test. After completing six business-tech related internships, entering college as a STEM major, and writing and publishing her first book project, Alston now knows how to be an empowerment model for others.

I sat down with this innovative teen tech author and global promoter of diversity in tech and children’s literature to discuss her inaugural project, “Sasha Savvy Loves to Code,” released on June 2, 2017, amid her many initiatives including Disney’s Dream Big Princess Campaign celebrating inspiring stories from around the world to encourage kids everywhere. Alston’s ultimate mission is to further the culture of science, technology, engineering, and math, while teaching some programming basics as well.

What compels you the most to influence girls in the world of technology?

I believe there is a stigma attached to the field of STEM, which denotes that you have to look a certain way or be a particular gender. I had six internships in technology, business, and education. During those experiences, what I noticed most was the lack of diversity among girls and people of color.

My mother is an author and convinced me to initially write the book. I thought that writing literature would be a very effective way to get more students interested in the field of coding, specifically, because there are not very many books about STEM for youth. It’s also why I wanted the character to be a girl and a person of color. In this way, I could demonstrate that anyone could be interested in coding and technology.

How important do you feel it is to educate black girls, in particular, on coding?

As a black girl, I didn’t become interested in coding until I had my very first internship. Even though I attended McKinley Technology High School, a STEM-based high school in Washington, D.C., I was not aware of the many aspects of technology that could be advantageous to my future. My current major is Information Systems, which is a correlation between technology and business.

My first internship at Microsoft Corp. landed me a position as a marketing manager. That experience forced me to understand the many issues in technology that people aren’t aware of and the diverse routes they could go. Prior to my internship, I believed that the only thing I would be able to do in technology was coding, every day, on my computer. Now, I see that there are so many directions and advantages. This experience became the driver for my desire to educate more students on where they can go with STEM, and specifically, technology.

When did you begin writing this book?

I began writing the book during my junior year in high school and while at my internship at Microsoft. Even though the book is constructed for ages 7 through 10, adults can relate to it as well.

During your internship at Microsoft, how did you adjust to the diversity of working with more students who didn’t look like you?

My internship at Microsoft was not diversified in that the majority of my colleagues were male. Only a few of us were girls. With some of my other internships, there was a lack of diversity with ethnicity and it was more challenging for me to adjust. I managed to get through it even though, only two or three of us were interns of color. However, all of my internships were STEM-based, in business, technology, or education.

You’ve acquired a well-rounded view of the STEM process, from the business side to the application side, which further inspired your desire to write this semi-autobiographical storybook about a 10-year-old African American girl, and her friends, attending an all-girls coding camp. How did your development, going into high school, encourage the completion of this project?

The idea of writing the book was also influenced by having attended a STEM-based school. My view of the STEM process inclined me to want to attend after-school programs and volunteer for various organizations. During my senior year in high school, I participated in a radio interview where I discussed coding. The interviewer did not know what coding was. That made me realize that many other people, as well, did not know what coding was. My mother and I discussed the possibility of writing a children’s book about STEM. She was the motivation behind the book project.

What’s particularly fascinating is to see a young adult write a book for young adults. Your book breaks down the process of coding in the simplest form, and in a way that adults can understand as well.

Exactly. It’s based on a school-age girl, her friends, and family. This age group is when most kids are deciding what interests they enjoy most. I wanted to give kids an additional option, outside of sports, art, etc. I didn’t know anything about STEM until I attended McKinley Tech High School. Had I, myself, been exposed at an earlier age, the likelihood is that I would have taken an interest in coding. So, I chose that age group.

Were math and science your favorite subjects in grade school or high school?

Honestly, no. I was always interested in writing. Once I entered high school, I took technology-based courses and I really enjoyed those, too. The subjects that were most interesting were technology and English courses. But I’ve always loved writing!

Did you ever think you would enter a career in STEM?

Not at all. I used to believe that I was going to be a lawyer because my mother was a lawyer. After my internship, my viewpoints shifted.

Having a love for writing and the law, per se, is a way for you to intertwine that creativity into the technology world that you now love. There are numerous programming languages that make it possible for us to create computer software, applications, websites, and so forth. What kinds of applications are you interested in creating?

I’m interested in creating an application that is user-friendly to high school students. I’m not sure what I want the application to be, however, I am certain that I want it to help high school students achieve and provide resource in other areas. I also want to have an educational startup program that aids students in under-served geographical areas. My university has an entrepreneurial lab that provides students with the tools and resources of how to start a business. I intend to seek more guidance from that as well.

How do you believe technology and coding saves lives?

During my research and while writing the book, I read an article that referenced technology as an integral part of everything we are and do. The fact that no one truly goes without utilizing technology on a daily basis makes it essential for us to know what we are using and the aspects it takes to create that technology. Our world is constantly changing and it’s very important that everyone is aware. Statistics show that most jobs in the future will require one to have some knowledge of technology and coding.

Yes, it seems to be the direction in which the world is going. We are heading toward robotics and technology, in a large way, which will have a great impact not only on our livelihood, but also our survival. While you are marketing this book, in college, and surrounded by other students in the technological world, do you ever feel isolated or do you have like-minded associates that share the same path?

To a degree, I definitely feel isolated. None of my friends are STEM majors. Their majors range from criminal justice to communications to business administration. Since I’ve produced the book, my peers ask various questions about it, but don’t fully understand what I’m talking about. Between the Science and Business Schools, I have yet met an Information Systems Major.

You are finding out that more teens and university students are unaware of the field of coding, hence, the necessity for your book. And you are, in essence, becoming an educator. Where do you see yourself with this project in five years?

Initially, I was aiming for an M.B.A., perhaps working for a Fortune 500 company. Now, this book has taken an unexpected direction. I’d like to expand into a brand, perhaps a seven-book series, in which I can have additional products and applications for students. I’m definitely considering my own startup company in educational technology, and I’m looking into commercial modeling to spread awareness of STEM.

What makes me excited about STEM is that there aren’t enough girls of color. There aren’t enough girls, period. One statistic I found is that less than 1% of high school girls are interested in pursuing a tech-related career. I feel it’s important to raise awareness from an early age. Since I myself am a teen, I’d like to show other teens that they can be interested in a variety of things, not just one. It’s important to break these kinds of stereotypes. I’ve met other computer science students and everyone looks the same.

Rochelle Soetan is the author and creator of the popular international blog and book "Tuesday Morning Love." She is a poet, commentator, workshop presenter, and contributor to the Award-winning anthology "More of Life's Spices: Seasoned Sistah's Keepin' It Real Volume 2". She anticipates the release of her spiritual memoir "Bridges: A Season of Surrender" late spring 2017. To connect with Rochelle Soetan on Amazon: Tuesday Morning Love the Book