When you’re a teenager, finding time to hang out with friends, go on a date, or even finish your chemistry assignment can be more difficult if you also have customers who depend on you to deliver their purchases on time. Yet, teens that own businesses have learned that you might have to put in a little extra effort, but the benefits of entrepreneurship are enormous once you find the right balance between school, the business, and friends.

In this, the third article of a four-part series about youth entrepreneurship, three teens tell the stories of how they started businesses and learned how to find fun while financing their futures.

Talk about being fashion forward, Zoe Damacela, 17, has been making and selling her own original clothing designs since she was a freshman in high school, but no one expected the hobby would take her to the White House.

Although the trip to meet her fellow Chicagoan, President Barack Obama, was her award for winning second place in the Network for Teaching Entrepreneurship competition earlier this month (click here to read about the NFTE competition and classes), Damacela believes that running her business and selling her apparel is a reward in and of itself.

“I love being able to be my own boss and set my own hours,â€ says the senior who is proud to have earned almost all A’s throughout high school. “I’m not only making more than the minimum wage teenage job, but I’m also doing something that is fun and I’m making a name for myself instead of making a name for someone else.â€

Damacela estimates that she has made $10,000 over three years, but she also wants teens to know that her accomplishments require a lot of hard work and sacrifice. She’s been doing this for such a long time that she has found ways to balance her time and make her business more profitable. Here are her tips on how to get a leg up on the runway to success.

Keep your grades up. “Make sure that you are not neglecting your school work because you are running a business,â€ says Damacela, who has a 4.25 GPA and applied to Yale, Harvard, Princeton, and Stanford for college. Putting school second will result in bad grades, which will decrease your chances of attending the college of your choice, reminds Damacela.

In addition, she wants teens to consider that yes, they’ve started a business, but they still don’t know everything yet. “As a teen you are just starting your life out and there is so much you don’t know, and you don’t even realize that you don’t know it unless you learn it [in school].â€

Work hard, but know your limits. Damacela designs her clothes, updates her Website and orders supplies when she gets home from school at 3pm. She finds that is the time when she has the most energy. Unless she has homework, she usually works on the business until 9pm.

She knows when to say enough is enough and call it a night. Experience has taught her that stressing out and over exerting herself is unproductive. “I’m sure every high school kid has felt overwhelmed even if they are not running a business,â€ she says. “I do feel like I have too much stuff going on sometimes, but what I do is take a step back, take a break, and just relax for a little bit,â€ says Damacela, who has learned that if she keeps working too late her designs will come out terrible.

Learn from your mistakes. When Damacela first started out she made a couple of mistakes. She bought supplies that were too expensive and she didn’t charge her friends enough for custom-designed garments. Taking the NFTE class at her high school taught her how to determine her profit margin and helped her realize she could purchase fabric and other embellishments for wholesale prices online without needing to have a wholesale license.

Stay confident. “Don’t let anyone tell you that you can’t do something because you are too young or you are still in high school or because you come from a low income community,â€ says Damacela, who says people have tried to discourage her since she first started thinking about running a business at age eight. “Obviously I proved them wrong. If I can do it anyone can do it.â€ 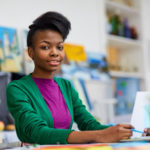