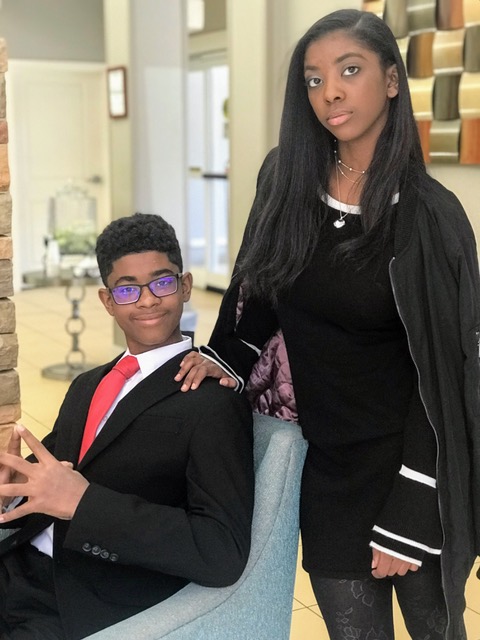 Georgia-based teenage entrepreneurs Charlie and Hannah Lucas launched their mobile app notOK on Wednesday and are close to sealing their first round of venture capital.

The siblings said they pitched the idea to a family friend who happens to be a professional investor.

“He bit right away,” said Robin Lucas, the teenpreneurs’ mother. “Raising venture capital wasn’t always part of the plan. He just came and took a very keen interest in the app and the rest was history.”

Although nothing has been signed or sealed yet, Robin is confident a deal will be reached by next week’s end.

The app, which is available on iTunes and Android, makes asking for help when you’re feeling vulnerable as simple as pressing a button. Charlie said he came up with the idea to help his older sister manage her medical condition.

Hannah, a sophomore in high school, doesn’t live life as a typical teenager. She suffers from Postural Orthostatic Tachycardia Syndrome (POTS), a form of dysautonomia that causes increased heart rate whenever she stands up. Her body does not control her blood pressure or heart rate as it should. That means whenever she stands, she may not get enough blood to her brain, which in turn makes her feel dizzy and lightheaded.

‘It’s basically a condition that makes me pass out. Your autoimmune system attacks your body and that causes fatigue,” the 16-year-old explained.

She said her condition got so bad that she had to be assigned her own wheelchair at her school’s nursing office. She also has her own special code blue and someone from administration has to accompany her at all the times. When Hannah first started passing out, she didn’t know what was wrong with her. She couldn’t get a proper medical diagnosis either. It took doctors eight to 10 months of testing to diagnose her.

Her fears quickly spiraled into anxiety and deep depression, which led to self-harm.

“Mom walked into my room and she saw me with a razor,” Hannah said. “I started crying and my hands were bleeding. We were both crying and I wondered what would have happened if there was nobody around.”

When Charlie, 13, came up with the idea, Robin enrolled him and his older sister in a summer code camp where he polished his coding skills learning Python, Java, and JavaScript.

With his limited coding ability, Charlie said he had to figure out a way to build the app.

With their mother’s help, the siblings enlisted the aid of a mobile app developer. But he said he wireframed the app himself, giving the developers a roadmap for how he specifically wanted it built.

Now whenever Hannah isn’t feeling well at school, she opens the app and just taps the notOK button, which automatically sends out a text message that reads: “Hey, I’m not OK. Please call me, text me, or come find me,” along with a link to the current GPS location to five pre-selected contacts in her phone.

Although Charlie has no future plans of creating additional features for the app, preferring to keep it as simple as possible, Hannah said she’s not stopping there.

“My goal is to make it a movement like the #MeToo movement,” she said. “I want other people who are going through what I’m going through to not feel alone. To know that it’s okay not to be okay.”