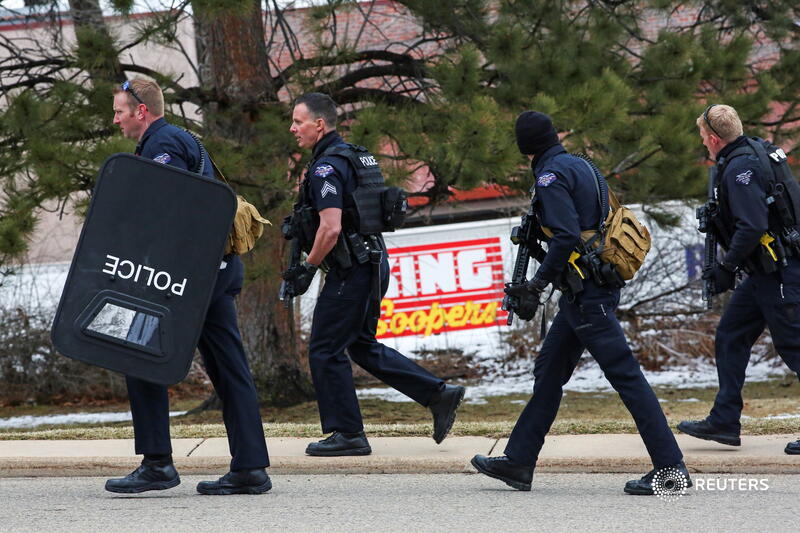 (Reuters) – A mass shooting on Monday at a supermarket in Boulder, Colorado, left 10 people dead, including the first police officer to arrive on the scene, and a suspect injured in the violence was arrested, authorities told a news conference hours later.

Police gave few immediate details of the shooting and no known motive for the violence, which unfolded at about 3 p.m. at a King Soopers grocery store in the Table Mesa area of Boulder, a city at the eastern foot of the Rockies about 28 miles (45 km) northwest of Denver.

The bloodshed marked the second deadly U.S. mass shooting in a week, following gun violence last Tuesday that left eight people dead, including six Asian women, at three massage parlors in and around Atlanta. A 21-year-old man has been charged with those killings.

Boulder Police Chief Maris Herold said ten people perished in the attack at King Soopers grocery. Among them were 51-year-old Boulder police officer Eric Talley, who she said was the first to respond to the shooting, about 2 miles from the University of Colorado’s flagship campus.

Police said the suspected gunman, who was arrested, was believed to be the only individual with serious injuries who survived the bloodshed.

Video footage from the scene broadcast earlier by television stations showed a shirtless, bearded man in boxer shorts being led away from the store in handcuffs, before he was placed on a stretcher and loaded into an ambulance. The man in custody appeared to have a bloody leg and was limping as he walked.