Photo Courtesy of The Australian Open

Japanese and Haitian tennis sensation Naomi Osaka has won the 2021 Australian Open. It’s her fourth Grand Slam title and her second victory at the tournament Down Under.

The 23-year-old champion defeated her opponent Jennifer Brady, 25, for the first time in her professional career.

“Hello everyone. Hi. Firstly– Do you like to be called Jennifer or Jenny,” Osaka asked Brady.

“I want to congratulate Jennifer. We played in the semis of the U.S. Open a couple of months ago, and I told anyone that would listen that you were going to be a problem—and I was right!” she said, turning to her opponent.

The champion also thanked her team.

“I want to thank my team. I’ve been with them too long. We’ve been through quarantine together, and for me, they’re like my family. They’re with me through training, matches, nervous talks before my matches. I’m really appreciative of them– so this one’s for you.”

I love how Naomi Osaka politely asked Jennifer Brady if she preferred to be called “Jennifer” or “Jenny,” then completely ignored what she said 😆pic.twitter.com/b8UzciMQnF

During a post-game press conference, Osaka expressed that she hoped to inspire female players who come behind her.

“Hopefully, I play long enough to play a girl that said I was once her favorite player,” the vicenarian said.

“Hopefully I play long enough to play a girl that said I was once her favourite player.”@naomiosaka is winning Grand Slams and inspiring tennis stars of the future 💙✨#AusOpen | #AO2021 pic.twitter.com/BaYA3JkZhx

Osaka’s victory at the Australian Open made her the first woman to win four Grand Slam titles in over three decades. Monica Seles held the record before her, according to the International Tennis Hall of Fame. 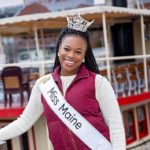