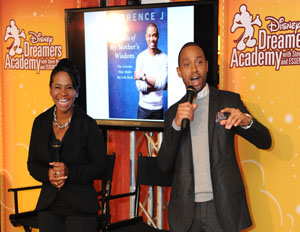 E! News anchor and actor Terrence “J” Jenkins and his mother Lisa Gonzalez teamed up with the Disney Dreamers Academy in New York last week to speak to an intimate crowd about the importance of dreaming big and achieving success.

Terrence J, a certified “dreamerâ€ himself, grabbed an once-in-a-lifetime opportunity as the former host of BET’s “106 & Park,” and turned it into a prosperous entertainment career as a television host, actor and now author.

Along with his already impressive career resume, Jenkins is a speaker and ambassador for Disney Dreamers Academy with Steve Harvey and Essence Magazine held annually at Walt Disney World Resort in Florida— and just released his first book, “The Wealth of My Mother’s Wisdom.â€ In the book, Jenkins credits his mother for his success and tells the story of her sacrifices, support, and inspiration and the impact it has made on his life.

Entering its 7th year, the Disney Dreamer’s Academy continues to hold true to its mission to inspire and fuel the dreams of teens, help them discover a world of possibilities and help them prepare for the future. Each year, 100 students, selected from thousands of applicants, participate in hands on, full immersion workshops related to a bevy of career paths ranging from animation to zoology. U.S. high school students ages 13-19 can apply to attend this innovative, outside-the-classroom educational and mentoring program.