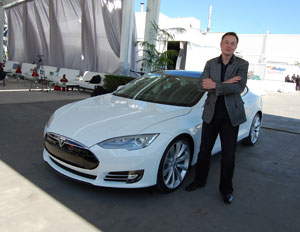 A California state agency warned Tesla it has grounds for a civil complaint over charges of race discrimination and harassment. (Image credit: Maurizio Pesce)

Electric car company Tesla is adding another long-expected vehicle to its lineup. And with it, trying to eat BMW’s lunch.

On Tuesday, Tesla took to Twitter to announce its upcoming electric car. The name? “Model 3.”

Originally, Tesla’s plan was to unveil its cheaper, lower-cost car, and dub it the “Model E.” But thanks to a trademark dispute from Ford, the company was forced to change it to the “Model 3.”

We wont’ see the lower-cost electric car until 2016, and won’t be able to drive it until 2017. In the meantime, Tesla is set to release its Model X crossover SUV in the second half of 2015.

The new Model 3 won’t, however, do anything to address your range anxiety. The company is saying it can travel around 200 miles on a single charge, while Tesla’s original car, the Roadster, can reach up to 245 miles. The larger, more advanced Model S has a range of over 300 miles.

The company is also set to overhaul its Supercharger stations, Tesla’s equivalent to gas stations, to incorporate battery swap stations that will remove your drained battery and swap it with a fully charged one.

Confirmed: Our Gen III car, due out after Model X, will be named Model 3. http://t.co/PLhUzycSlp pic.twitter.com/noZf17LXre

There are no images of the new model as of yet, and Tesla is stating the images seen on Auto Express’ site are “mock-ups based on their own speculation.”

FYI, the Model 3 images used by @AutoExpress were mock-ups based on their own speculation.