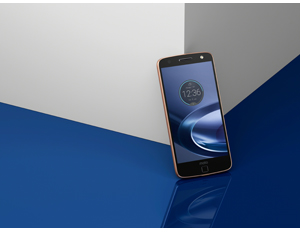 I’ve owned a Motorola Droid since the first one came to market in 2009. While a fan, I’ve been critical of the fact that Motorola tends to overpromise and underdeliver when it comes to Droids. These phones start strong right out of the box but my experience has been degradation in performance over a relatively short time, be it with battery life, camera, or wireless connectivity.

Which is why I am super excited about the Motorola Moto Z Force Droid. It seems to be not only an amazing phone (and a challenger to the iPhone) out of the gate but also, now using it almost a month, appears to be Motorola’s most well-honed Droid to date.

Plus, the addition of “Moto Mods,â€ is a total game changer. These are add-on packs that physically snap onto the back of the Droid via a magnet. With them you can add extra functionality to your phone such as turning it into a video projector, a high-quality JBL speaker, or add extra-long battery life with the battery pack Mod (there is a stylish Kate Spade power pack available, as well).

Motorola claims battery life of about 40 hours of mixed usage, which is spot-on during my testing. Turbo charging works great; it charges the phone about 50% in less than 20 minutes. You must use the included charger for turbo charge.

The phone ships with the latest version of Android, Marshmallow. It also features Moto enhancements. One enhancement is Moto Action, which lets you perform simple actions with the phone using movement. For example, flicking your wrist twice launches the camera.

Moto Voice is another enhancement that lets you tell the phone to give you directions, play music, set an alarm and more.

Other specs include 1080p full HD video capture; a 21 MP rear camera; a 5 MP front camera with wide field of view and extra flash; and a fingerprint reader.

There is also no 3.5mm audio jack. Instead, the phone, which supports USB-C for headphones, data transfers and charging, ships with a 3.5mm to USB-C adapterÂ  for headphones.

The Motorola Moto Z Force Droid is available at a starting price of $720. You can specify customization such as color or order Style Shells (starting price of $19.99), which are cases of different colors and material appearances such as leather or nylon.

Motorola also offers the more affordable Moto Z, starting at $624, which has the same feature set plus support of the Moto Mods but with a slightly less robust hardware as the Z Force.